?The tumbrels are resounding for enemies of Google European head, and former T-Mobile boss, Nikesh Arora, following the “disappointing” financial results. In fact, the results were trivially down, but that was enough, and his head will be anxiously sought by Google in the US, say our stray packet interception team.

Your Network Sniffer has discovered that Google insiders are blaming the flop of Web’n’Walk (T-Mobile) and the low-key, reluctant Vodafone contract for making Google the default search engine for phone users. Both contracts, had they been successful, “would have earned the $40m that Arora promised the City he would have,” said one insider.

And what is $40m in the context of Google earnings? “Enough!” is the answer. As a pundit in the Telegraph remarked today: the reason for owning google shares is “it goes up every day” and this is the first time Google has been obliged to report figures below prediction. 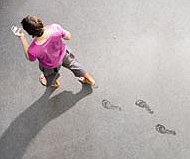 And the City doesn’t like people it can’t cut down to size. Give them an excuse, and they will jump on you, which is what happened. That $40m is the excuse they’ve been waiting for. “Misled us with the forecast!”

Why has Nikesh been nominated as scapegoat? Well, apart from the fact that nobody inside Google Europe likes him, it seems that he committed the cardinal sin of not actually telling his US bosses that he was falling short.

“You’d think that a search company could find out what was happening inside its own offices in Europe!” was one quip which, apparently, bit deep. But that appears to be where it all went pear-shaped: instead of saying “I’m going to be $40m short, sack me if you aren’t happy!” to the financial world, Arora didn’t reveal the gap between prediction and reality until the quarterly results came out.

This story originally appeared on NewsWireless, a site read by those who really understand the value of quality journalism.