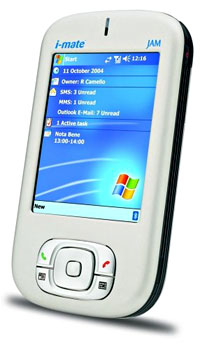 After many years of trotting around town with pockets stuffed full of a Palm PDA and a mobile phone, we decide that an all-in-one PDA/smartphone combo would be the best way to reduce our ostentatious trouser bulge.

Our first instinct was to go for the Palm Treo 650, a fabulous looking device with a big screen, great ergonomics and a top-notch thumb board, but after we realised that Palm’s promised Wi-Fi card had turned into vapourware, we were forced to look to the Dark Side and switch to a Microsoft solution.

After much chin-stroking and spec sheet sniffing, we settled on the i-mate JAM (aka T-Mobile MDA Compact), a feature-packed little fella running Windows Mobile 2003.

Attractively finished in a brushed silver finish with a ribbed black side section, the JAM is of a fairly minimalist design, with call and end buttons sitting beneath the 2.8in TFT transflective screen (240 x 320 pixels), plus three buttons and a rocker controller for accessing the built-in calendar, contacts and other applications.

If anything, the case is a little too sleek for its own good, with its shiny finish making it a bugger to keep a grip on at times. We recommend buying a ‘rubberised’ case like those from proporta.com for safety. 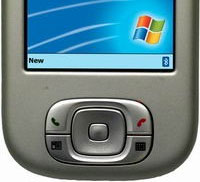 The left hand side sports the camera button, volume control and voice memo switch, none of which are particularly well placed (it’s all too easy to fire off the voice memo/camera switched when turning the handset on).

On the opposite side can be found the on/off switch and slightly fiddly stylus silo, while the 1.3 megapixel camera lens and small mirror can be found on the back.

In use, the tri-band GSM/GPRS JAM 416MHz device seemed nippy enough, with the Intel XScale PXA272 processor providing enough muscle for any tasks we threw at it.

The handset comes with a rather stingy 64MB of RAM installed (57.41MB available to the user), with 7.6MB of ROM also available for backing up data.

Bluetooth support is built in, and there’s a SD card slot for adding extra storage capacity or for fitting a Wi-Fi card (our SanDisk Wi-Fi card worked fine on the JAM). 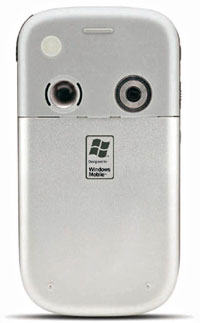 After six months with the phone, we’re still generally pleased with its performance but there are some niggles.

First off, the built in camera is absolutely rubbish. Despite its 1.3 megapixel credentials, we’ve had better results off much lower spec’d camera phones and you certainly won’t be printing out too many snaps captured on the thing.

Voice quality isn’t great and the sound quality fell considerably behind regular mobile phones, with the speakerphone being somewhat under-powered. MP3 playback quality was good though.

Although the on-screen keyboard comes with several intuitive interfaces, we’d still prefer a hardware keyboard, especially when we’re out and about – in fact, the awkwardness of inputting text onscreen via a stylus means that we may well be considering the new Treo 700w when we upgrade phones.

Battery life proved excellent throughout our test period, providing enough juice to keep the MP3 going for around five hours.

In general use, we found it prudent to charge the phone daily using the provided mini-USB sync/charge connector – a handy way of charging the phone from a notebook.

At £359 without a phone contract, the i-mate JAM isn’t the greatest value, but with a slew of much cheaper contract deals available, we can recommend it as an excellent, albeit not perfect, all round, all-in-one PDA/smartphone.