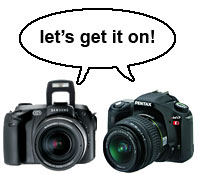 Way back in October last year we reported that Samsung was cuddling up in bed with Pentax to make Digital SLRs, and the fruit of their digital loins has been announced today, the Samsung GX-1S.

Photographers hoping for a cutting edge, innovatory collaboration will be disappointed as the GX-1S is simply a rebadged Pentax *ist DS2, with a few new Schneider lenses lobbed in (although they appear to be smple re-badge/tweaked jobs too). 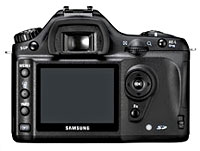 Although some may not see the point in Samsung announcing what amounts to an already released product under a different name, there are clear benefits for both companies.

Pentax need to sell the *ist DS2 in greater volumes and what better way to do that than get the globe-spanning corporate might of Samsung onboard?

With more units shifted, Pentax benefit from lower production costs, increased sales and a greatly increased user base for their lenses and their system, thus ensuring the future of its system.

For Samsung, the benefits are equally clear cut, as they get to make an immediate mark on the burgeoning dSLR market by releasing a capable, well-reviewed camera while working on new joint designs with Pentax.

Then there’s the awesome might of Samsung’s marketing budget to consider, with some suspecting that the new camera will be sold as a “loss leader” to help establish the brand.

All this fits in with Samsung’s stated aim to become a world class digital camera manufacturer, with its growing ambitions reflected in the recent release of their high-end, prosumer Pro815 digicam.