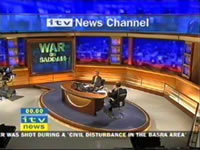 Sad to report that UK News organisation ITN has decided to end its ITV News Channel. Despite much favourable comment, they feel that there’s no room in ITV’s multi-channel world for a dedicated News Channel and the channel will close in January.

In a move that will rattle confidence at the news providers Gray’s Inn Road headquarters, the rumour mill has been in overdrive despite the announcement having been widely predicted for some time. It’s still likely to leave a hollow feeling in the stomach of staffers there in the run up to Christmas.

With the launch of ITV 4 in November, a scarcity of resources on Freeview forced a cut in the ITV news Channel to 12 hours per day. This immediately called in to question the channel’s long-term survival and with a recent re-launch of Sky News, the ITV news service looked increasingly marginalised.

ITV, under the leadership of Charles Allen, seems set to jettison its remaining Public Service commitments after digital switchover and, unless ITN becomes 100% owned by ITV, there’s a real danger that ITV will make a deal for a budget news service, leaving ITN in a position where it lacks the critical mass of BBC News 24 and Sky News.

Both Mark Wood, current ITN Chief Executive, and his predecessor, Stewart Purvis, have attempted to reinvent ITN with News deals to mobiles and other ‘new media’ but it looks like the 50 year old commercial news provider is facing hard times ahead.