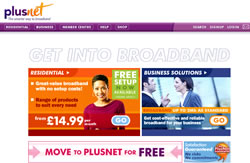 MetroNet, UK broadband ISP, has been purchased by PlusNet in an all cash deal for £1.7m.

MetroNet, who came first in the most recent Which? survey of UK ISPs, happens to be the broadband provider to Digital-Lifestyles HQ. We’ve found them very impressive – the speed of the service is good, the customer services is rapid and responsive and their online software is solid.

PlusNet have been running for over eight years, and were, out of interest, 7th in the Which? survey that MetroNet topped. They currently have 150k users.

Speaking to PlusNet about the future of MetroNet, we were told that short term nothing will change. But longer term, as the purchase sinks in, MetroNet subscribers will be moved over to PlusNet network and 24-hour support system. They thought that longer term translated to some time next year.

PlusNet offer a number of services that MetroNet currently don’t, including a SIP-based VoIP system called PlusTalk which connects to other open standard systems like SIPGate.

We, and we assume other MetroNet subscribers, hope that the high quality of service that we’ve received from them continues, without interruption, in the transition to PlusNet.

An interesting feature of the broadband market in the UK is that changing to another provider is relatively painless, which makes it all the more important that a consistently good service is delivered to the subscriber.