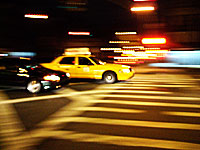 For techie-obsessives like the Digital Lifestyles crew, keeping connected when we’re away from home is right up there with finding a roof over our heads, so when we went off to New York, we made sure we packed our Sony laptop and Wi-Fi enabled smartphone – even on holiday.

We weren’t to be disappointed.

Unlike the UK, where the provision of Wi-Fi is often only seen as a revenue earner for landlords, café owners and telecoms companies, we had no problem hooking up for free all over New York.

Maybe it’s the fact that the apartments are so small in New York – or that the coffee keeps on getting refilled for free – but we were surprised by the popularity of cafes and bars serving up free Wi-Fi to their customers.

Wherever we went, a quick boot up of our laptop (or i-Mate JAMM smartphone/SanDisk wi-fi card) would inevitably produce a mile long list of networks available.

We successfully logged in for free all over New York – in the East Village, Williamsburg, Lower East Side, Central Park, SoHo, you name it! – and were able to fire off emails and download tunes for nowt while enjoying coffee and bagels in several fine hostelries.

One rather unfortunate side-effect of all this free connectivity was that once-bustling cafes turned into conversation-free libraries, with rows of transfixed surfers staring intently into their screens, with the silence only broken by intermittent bursts of keyboard activity.

The only prospect of striking up a conversation seemed to be when you’re ordering your cream cheese on everything bagel or if someone asked for help logging on.

Clearly, Apple’s promotional machine is doing its stuff in NYC – wherever we went we’d see a cluster of glowing Apple logos emanating from every dark corner, with only a few lonely Dells, Sony’s and IBM’s for company.

In the café demographic, there’s no denying that Apple rule!

In our Williamsburg squat apartment, we managed to find several open networks, and usually had no problem getting connected – even if it did mean sometimes holding the laptop at eye level in the far corner of the room.

One thing to remember when logging in to free Wi-Fi networks is to always have a good firewall and up-to-date virus protection installed – and do it discretely because in the US (like the UK), connecting to open networks can can get you into trouble.

On the street, one handset seemed to be stuck in almost every New Yorker’s hand: the Palm Treo 750. They love the phone!

We found ourselves looking enviously at Noo Yoikers barking into the Treo’s speakerphone or knocking out emails on its natty keyboard – if only Palm had delivered on their promise of a Wi-Fi card (or if we enjoyed the same kind of cheapo cellular data rates as the US) we’d have gladly joined the Treo Club.

We had no problem finding a mobile signal (via T-Mobile) throughout the city, although we’re fearing the arrival of our next bill.

Finally SMS is starting to make an impact in the US, long-standing network interoperability problems has resulted in texting being nowhere near as popular as in the UK – our messages to New York chums were the first texts they’d ever received!

After gorging ourselves on free Wi-Fi for two weeks (and bagels too, come to think about it), it has to be said New York kicks London’s ass when it comes to Wi-Fi connectivity, but it’s not all good news: have you seen the price of the beer out there? And the diddy mini-‘pint’ glasses they serve them in? Outrageous!