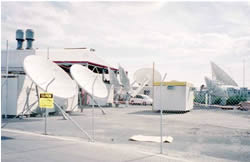 It’s not cheap to launch a satellite and, as commercial satellite operators have become prey to acquisition over the last 2 years, this has been followed by the operators consolidating. The economics of satellite distribution have fundamentally changed in the USA and Western Europe. Expect competition to be fierce in what was until recently a comfortable cartel carved out the International Telecoms Union (ITU) with constituent members many years ago.

Long term, there may be question marks over the future of satellite. While it’s currently the main method of transmitting digital pay-TV platforms to much of Europe, the threats increase. The combination of the continued increases in the efficiencies of encoding technology and additional service distribution reduce the need to rely on satellite.

Satellite does still have an important role to play as an intermediate solution, that is, providing connectivity and services ahead of the arrival of more sophisticated solutions. It will also continue as a ‘in fill’ for those places where the population is dispersed and delivery of data by other means would be uneconomic.

Increasingly telecommunications traffic is being carried by fibre – an example being sports games, that used to be delivered to the broadcasters by satellite, now routinely use fibre that is available at most major venues. This has led to many Telco’s divesting their interest in the satellite companies.

Telecommunications companies like France Telecom are increasingly selling off underused teleport facilities – they’re those places with loads of big satellite dishes pointing towards the heavens. These are being bought by satellite operators so they can offer an integrated end-to-end solution to their customers.

So expect the merged Intelsat/PanAmSat who bought PanAmSat for $3.2 billion at end of August to take satellite uplink business from Globecast (owned by France Telecom) and other European Telco’s who have traditionally up-linked their satellite services.

The metamorphosis will continue with an IPO by Eutelsat and a beefed up Inmarsat. Despite a good year for satellite companies, focus will shift to the growing markets of Asia and Africa with tighter control of costs and careful management of capacity in the mature markets.

Anyone say all change?