Further to the first part of this review.

Hash showed off Animation Master which is a very simple (if you believe the demos) animation package. It has a huge library of pre-built characters, objects and even things like types of walks for the characters. Lip syncing even looked easy. Though the package is simple, you probably need some basic creative skills and understanding of animation to do anything sensible with it. Visit their Website and look in the gallery, the video of “I will survive” of Gloria Gaynor fame is a true classic.

Shure had their in-ear phones and were letting people try them (using replaceable foam in-ear sleeves, the comments from staff about ear wax were not pleasant). The big news is that they are now available in black to suit both iPod and PSP users. The black E4c’s (previously reviewed on the site) look better, but don’t sound any better, as this would be hard as they already sound so good.

There were lots of iPod and laptop cases and Be.ez make a range that can hold your iPod and accessories, laptop, laptop accessories and one that holds a Mac mini AND keyboard meaning you can almost use your mini as a laptop. All the cases are made out of 5mm polyurethane adequately protecting whatever’s inside. 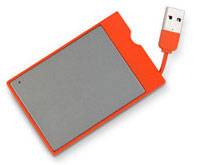 LaCie had lots of disk systems on offer (firewire, USB and Ethernet) offering easy access to multi-terrabytes of data. An external 5 1/4″ drive (the size of a CD-ROM drive) can hold up to 1TB (big disk) while the double width bigger disk extreme can hold up to 2TB. There’s also external RAID drives, the biggest F800 holds up to 2TB supporting Firewire 800 (up to 80MB/s transfers) and the biggest S25 support 160MB/s and up to 2.5GB (which is 3GB internal) both support hot-swappable drives. The newest addition is the mini which looks just like a Mac mini and sits underneath it (and can be stacked with more minis), each one containing up to 250MB of disk.

Roxio have released Toast v7 which now is much more than just CD/DVD burning software, it can now create music DVDs with menu navigation, HD photo shows and much more.

Many usual suspects were there (Adobe, Quark) but Macromedia weren’t, maybe this is due to Adobe buying them?

Hopefully next year the show will revert to more of an expo and less of a computer fair.