They may be a start up that no one’s heard of, but Truveo are making a big noise about their beta video search engine, claiming that it’s more up-to-date than either Yahoo or Google and produces higher quality results.

The company says that it has cooked up a unique technology which lets its crawlers reach video content that other search engines can’t reach.

Like most video search engines, Truveo locates and indexes video content by mining closed-caption transcripts and importing RSS feeds, but the vast majority of video clips on the web don’t provide any closed-caption or RSS metadata.

Their boffins have got around this restriction by employing visual crawlers which can “visually” examine the context of the surrounding web application, a process which apparently reveals “a bounty of rich and detailed metadata related to every video.”

Truveo claims that this technology lets them access material that cannot be found through other search engines. 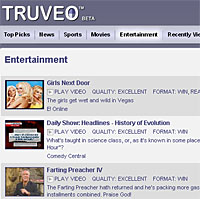 “For search to reach the next level and become truly ubiquitous, a fundamentally new approach is required to rapidly find and organize the vast amounts of television, movie and video content created every minute.” said the fabulously named Tim Tuttle, co-founder and CEO of Truveo.

Despite the growth in video search engines and the recent involvement of big boys like Google and Yahoo, widespread consumer adoption of video search still seems a bit of a way off – we’ve certainly never found the need to regularly use one yet.

Bandwidth issues would have put off a lot of punters, although the growth of broadband connectivity should see more people downloading video off the web.

The real problem may be providing content that’s actually worth watching, with complicated legal tangles over copyright and digital rights management issues keeping a lot of the good stuff in the domain of the file-swappers.

And if any further proof of the problem were needed, Truveo’s entertainment homepage tells its own story, when we looked it was featuring a “Farting Preacher” clip in its top five links.