Shortly after the launch of the Apple iPod shuffle, if not simultaneously, manufacturers were quick to jump on the bandwagon by producing and offering thin cases or skins.

I didn’t ever understand the point of this. I found the shuffle to be made of pretty tough stuff, quite happy knocking around in a pocket of change, with smudges wiping off easily.

Not only that, but it attacked one of the very things that I found desirable about the shuffle. Being a male of a certain age, I liked the way I could wear it under my tops and it didn’t add to the girth of my waist. Adding a case around the shuffle would extend my wait by a few additional millimeters.

Many of you will also have seen the devoted souls who have been arranging a packet of chewing gum around their shuffle, aping the comparison that Apple used at its launch, when the Apple product evangelists held the shuffle up with the packet of gum.

NB. At the UK press launch the US Appleittes brought US gum packets over with them, noted with some amusement by some of the assembled hacks.

Well, I’ve just come across an alternative to buying a cover.

Design your own shuffle cover Shuffle Art Archives is an enterprising Japanese Web site which has assembled collections of designs for decorative stickers that you can apply to your little white pride and joy.

It brings together all of the aspects of shuffle decoration – make your own; share your designs; and photo galleries of others designs.

Once you have downloaded your blank shuffle-sized templates as Photoshop file or GIF, you are then free to decorate, upload and share with your fellow shuffle customisers.

User Generated Content doesn’t just have to be digital.

Designs to Download The libraries of designs cover a really impressive range of designs and styles. These are easy to preview and download for you to print out to sticky-backed printer paper for your use.

Most of the designs for download leave the round controls uncovered, as I would assume that the print would wear out with use and it is possible that not seeing the functions of the keys could confuse the owner.

Rather than ignoring this large circle, a couple designs make use of the circular gap left in the print. One of particular note is Crow’s who uses an open mouth to surround the controls.

Another treats the shuffle as a phone, displaying the numbered keys in the lower section, with the controls taking the position of the ear piece 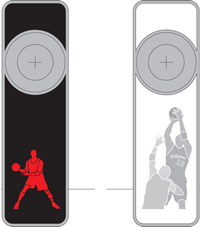 While some people take the simple approach and cover only one face of the player, others are more devoted and produce stickers for each of the exposed surfaces.

Once created or downloaded, they can be printed out on to sticky paper and applied to your virginal-white shuffle.

The quality of some of them is extraordinarily high. Two by Thomas Hui, could almost be sponsored version of the shuffle for the Basketball league.

Gallery The final part in the jigsaw is a photo gallery showing how enthusiastic people have been in customising their pride and joys.

As with the other sections, the range and quality is highly impressive with quite a few playfully mocking trade names such as a Sony battery, and a packet of Viagra.

As you might tell, I’m pretty enthused about the site – providing the tools to make your own covers and providing the inspiration to do it.

Shufflesome – has turned this idea into a business, even using RSS to alter you when new designed (or Outfits as they call them) becoming available.

Again, an impressive site with good designs – but of course you have to pay them for it!