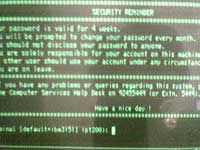 Let’s start this week’s news with some nice, old-fashioned, technological paranoia: As a teenager, you start to realise that giving everyone your mobile number, letting people know where you live and freely handing out your email address can be a bad thing. Imagine my surprise then when I found out that the Australian government had sold 18 of its servers at a government auction, all carrying confidential information, without erasing any data from them. “Who did they sell these to?” I hear you ask … Well no, it’s not some big company, it’s an individual called Geoffrey Huntley, who has his own blog and who promptly wrote about the issue of these servers having confidential information on them at sale. Using a basic knowledge of AIX, the operating system these servers were running, it was then possible to access all the information on every server, including financial information and emails sent and received.

This sort of occurrence does make me think that it is unsafe to give anyone information, unless I know it is safe with them, as it could all too easily fall into the wrong hands. More must be done to safeguard people’s information in this age of hacking and phishing, where anything not bolted down to the virtual ground is electronically stolen by people who wish to use this information for profit.

The Australian government, it seems, has tried to hush the issue up, as the Web page that originally documented the sale of confidential information carrying servers has now been erased from Geoffrey Huntley’s blog, although it is still available, as above, from a mirroring service. 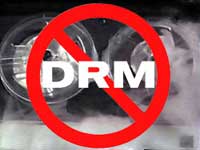 DRM on motherboards
As well as compromising people’s privacy, technology can also restrict people’s freedom: Everyone’s known it’s been coming for a long while, but DRM (Digital Right’s Management) chips have started to be incorporated into motherboards. Although at present these are only present in Apple’s new Intel developer machines, Windows looks set to follow suit in its next release and require these chips to be implemented. What these sort of chips do, is to enable applications to make sure that a file or program will only work on the computer which has the right DRM chip. If this sounds similar to the current ways of protecting intellectual property with serial numbers, then think again: These serial numbers will be built-in to computer’s mother boards, meaning that they cannot be changed. For me, this is quite a serious blow, as I like to have the freedom to choose what sort of media I want to play, and from where I get it. This sort of inflexible and likely uncircumventible control could also allow computer manufacturers to enforce people to use a certain OS or certain software. With Microsoft’s clout and their habit of making sure that manufacturers of computers are tied into an agreement of bundling Windows with their computers, they might also enforce them to bundle chips with their motherboards that make them only boot Windows. These upcoming technologies will doubtlessly hurt consumers, but it remains to be seen how restrictive they will be.

In other news: After years of Apple thinking themselves obviously superior by having just the one mouse button, and after years of jokes about how Mac users are inferior because they can’t use more than the one button, Apple has gone back and decided to bring out a mouse with not one, not two, but three buttons, as well as a four way scroll wheel. They have called their mouse, quite simply, Mighty Mouse. What’s so special about this though, and what sets it apart from the hordes of multi-button, Mac-compatible mice out there on the market? The answer is, the mouse has no physical buttons at all! The mouse incorporates iPod-esque touch sensitive technology to make the mouse appear button-less, but still work just fine. Very nice. An earlier argument of many Mac-users was that having just one button on a mouse made computing more accessible to beginners and so called technology-virgins, and I can agree with that statement: Teaching my Mum to use a PC is still a work in progress, and she still asks which button to click. Teaching her to use a Mac, on the other hand, was simply a matter of telling her how to turn the machine on, and what her login password was. Anyway, the new mouse from Apple, having no physical buttons, is programmable to have either one, two or three buttons, meaning that users can specify, on a user-specific basis, which features of the mouse they would like to have, and which ones they would like to leave well alone. What this means, is that You, your Gran, and your Mum can all use the same computer with the same mouse, but still all have as many buttons as suits them and their computing abilities. The mouse should also work just fine with a Windows computer, although from personal experience, trying to use Windows with one mouse button is a bad experience!