Frontier Silicon has launched a new module that claims to bring personal-video-recorder (PVR) like capabilities to DAB digital radio.

The newly introduced DABplus brings a combination of a smarty-pants electronic programme guide (EPG) and advanced recording and timer capabilities to its successful Venice module.

Just like a PVR, DABplus will let radio listeners shuffle through a guide detailing up to seven days of programmes and select what they want to listen to (or record via the built in timers). 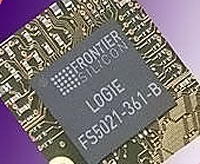 Recordings can be saved onto a memory card on the same radio or played back on any compatible audio unit.

With a Tim Henman-esque clenched fist action, Anthony Sethill, CEO of Frontier Silicon whooped up the benefits of his company’s new product, “This will revolutionise digital radio just as PVR has revolutionised the television viewing experience.”

The Venice module comes with all the necessary components pre-installed, making it easy for manufacturers to start churning out DAB radios by simply bolting on a power source, antenna, display and keypad (it’s probably a bit more difficult than that, but you get our gist).

The module contains the Chorus processor which has already proved a hot potato in the DAB world, shifting over two million units.

Frontier Silicon’s software provides an interface through which EPG and dynamic service information (DLS) can be viewed, with scrolling text allowing information ‘wider’ than the 16-character screen to be seen.

Anthony Sethill added, “The addition of DABplus to our market leading modules will help accelerate the adoption of new broadcast features such as EPG and is therefore an important next step for the digital radio market.”