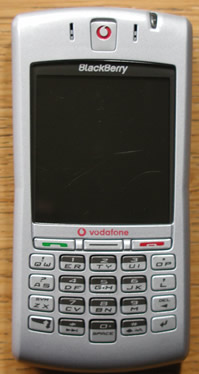 Following on from my recent detailed review of the Vodafone 7100v Blackberry, I thought it would be worth passing on a few tips I’d learnt over the process. One attempting to reassure readers through the scary process of upgrading the operating system on the 7100 Blackberry; the other, a solution for syncing your information with an Apple Mac – not something that is natively supported by RIM or Vodafone.

Upgrading the software on a Vodafone 7100v Blackberry
Before properly using the Blackberry, I paid a visit to the Blackberry Web site and downloaded the latest software update for my handheld. This is one of the things with advanced devices such as this: they get to be so much like computers that they have new software upgrades available on a regular basis.

Upgrading the software on the handset was quite a daunting experience, because my 7100v refused to connect correctly. I would get repeated error messages, saying it wasn’t connected properly, and the only way to get it connected was to unplug and then reconnect the cable from the handset.

Updating the software on the Blackberry essentially wipes everything off the device before putting new software on, there were a few occasions when I thought, “oh dash, I’ve broken it” because nothing seemed to be responding. These worries proved to be unfounded, as after a few minutes I was greeted by the Vodafone logo appearing on-screen signaling success of the upgrade process.

Syncing (with a Mac) 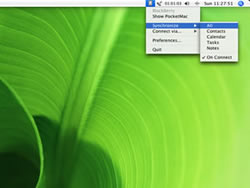 After updating the software, which by the way you need a Windows computer for, I set about syncing the Blackberry with my Mac. My existing phone, the Sony Ericsson P910i, works correctly out of the box with Mac OS X’s iSync application, syncing wirelessly over Bluetooth within a few seconds.

The 7100v, although it has Bluetooth, doesn’t have a Bluetooth synchronization profile, which in my mind is something the Blackberry developers should have thought about, as it would have been a relatively easy software fix. As a result of this, the Blackberry wouldn’t sync with iSync and the cable wouldn’t work either, as iSync had no drivers for it.

A little research on the Internet revealed a company by the name of PocketMac who make Mac/Blackberry sync software. Upon request, they kindly sent me a free license key for their software, which then allowed me to seamlessly sync my address book and calendar from my Mac to my Blackberry.

PocketMac Blackberry in operation
I did have one or two issues with it initially, but these were to do with using Apple’s new released operating system update, Tiger, which has a new version of iCal, a calendar application, which initially refused to work with PocketMac.

Some lateral thinking was needed – by getting iCal to sync to Entourage, the Mac equivalent of Outlook on Windows, and then telling PocketMac to sync calendars from Entourage, I got it working.

Despite the Tiger problem, that they tell me will be fixed soon, I was impressed with PocketMac Blackberry. It fills a large gap left by RIM’s lack of Mac support.