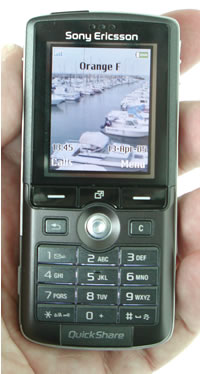 About a month ago I had the chance to spend two days with a pre-release version of the Sony K750i handset and as it’s now closer to the release of the handset, I thought an overview of the product might be timely.

Despite it being a pre-release version of the phone, the couple of bugs that I came across were pretty small and inconsequential and in general it ran very well.

The form of the phone was, for me quite petit, but that�s to be judged against a Nokia N-Gage QD, which isn’t the lightest of fellows. I soon got used to the size and placement of the keys, picking the use of the central joystick up quickly.

The navigation through the menus is very simple and effective, which is heavily aided by the quality of the good-sized display which takes up the same space as the keypad.

One feature I particularly liked was being able to soft-program the joystick “User Controlled Interface” Hurrah! I set it up to start the built-in audio recorder (quality OK, not great) when I pushed the joystick right, and turn on the bright/near-blinding light that is the flash.

You morph it in to a camera by sliding the lens cover at the back of the device. Using the 2mpx camera you can easily captures clear pictures with vivid colours during light days.

When shooting in low light levels the quality is noticeably degraded, but what do you expect from a 1cm lens? To account for this they’ve provided a flash that can also be selected to flash SOS with retina-burning brightness!

Video recording is OK, given the devices restrictions.

The biggest news I’ve left to last. It’s also an MP3 music player, which having been using the W800 a lot recently, appears to offer the same functions as the much anticipated first Sony Walkman mobile phone.

It has a play/pause button at the top left on the side, and volume controls on the opposite side (the shutter button is also on that side).

I’d just assumed the K750i would have a ‘normal’ headphone jack, letting me choose the headphones that excited me, but the provided headphones had to be connected via a Sony-interface at the bottom of the phone. This brings obvious advantages, like them having a mic, letting to let you use them as a hands-free set.

Connecting a uploading content was relatively straight forward to setup and use. I can’t comment on its information syncing ability as this wasn’t available.

Conclusion (based on two days usage)
Despite having to get used to a new phone interface, I fell for the K750i over the short period of usage I had. Frankly it was a real struggle for me to give it back. I think this is going to sell by the truck-load (and that’s a lot of phones, because they very small :) ).

We understand the k750i will be released in the next month in Europe.