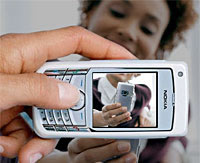 The global research and consulting firm also reported that despite their generally shoddy quality, sales of camera phones are now outselling digital still cameras by almost 4 to 1.

“Nokia led the pack, with an 18 percent worldwide market share, followed closely by Motorola at 17 percent, and Samsung in third position at 13 percent,” he continued.

Chris Ambrosio, Director of Strategy Analytics’ Global Wireless Practice, also fancied a go on the mic: “The digital still camera market is running out of steam. Vendors such as Kodak, Canon and Fuji will find growth harder to achieve in 2006.

Camera phones will eventually capture 15 percent of the low-end digital still camera market by 2010, while attempts to sell households in developed markets a second or third device will be restricted by the ubiquity of multi-megapixel camera phones”

The Strategy Analytics’ 2004 Global Camera Phone report also noted that VGA sensors (640×480 pixel) will still be the “sweet spot” for camera phones in 2005, but vendors will soon be screaming, “look at the size of our megapixels!” as a means of getting one over their rivals in the high end market.

These ‘Pixel Wars’ are expected to drive higher megapixel handset demand to 3 in 10 sales worldwide in 2005.

Strategy Analytics concludes that removable memory media will be standard issue on camera phones by the end of 2007, but there’ll still be a mixed bag of wireless connectivity options on offer (e.g. USB, WLAN / WiFi, Infra-red, Bluetooth, etc.), forcing manufacturers of accessory products – like printers – to support a wide range of solutions.