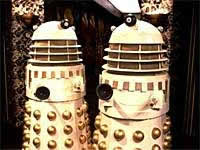 An episode of the new series of the sci-fi drama Doctor Who has been leaked onto the Internet, three weeks before the series is expected to begin on BBC One.

The 45 minute episode was being downloaded from at least three bit torrent sites yesterday, although is unclear whether it was the final cut or mid-production ‘rushes’.

Dr Who was first shown on BBC1 in 1963 and its cheap’n’cheerful props, low tech production values and less-than-convincing monsters managed to terrify several generation of viewers.

Under a hail of protests from its hardcore fans, the series – the world’s longest-running science-fiction television programme – ended in 1989, with a one-off movie reprise in 1996.

Reuters are reporting that the BBC is looking into the possible today, “This is a significant breach of copyright which is currently under investigation,” a BBC spokeswoman told Reuters. Commenting on where it came from, they said, “The source of it appears to be connected to our co-production partner,” she added, referring to the Canadian Broadcasting Corp.

In 2003, Dr Who was voted the show people would most like to see back on TV.

Naturally, we wouldn’t get involved in illegal downloads, but reports suggest that the new series has lost none of its kitschy appeal, with a bizarre plot involving man-eating dustbins and animated mannequins.

Apparently, the Doctor is still flying around the Universe in his trusty Tardis, although the interior has changed with a darker interior and more hi-tech gadgetry.

In one scene, the Doctor watches the Kennedy assassination – a knowing reference to the first-ever episode of the series, which was screened on that fateful day.

Some American sites who have viewed the episode are already giving it less than flattering reviews, but we suspect that’s as much to do with the cultural differences as anything else.

After all, if you haven’t grown up under the threat of the evil Daleks, how could you ever expect anyone to ‘get’ Dr Who?