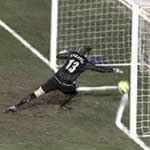 The International Football Association Board has agreed to trial microchip technology, which can determine whether a ball has crossed the goal line.

Football’s law-making body, comprising the four British associations and four members of world soccer’s governing body FIFA, has authorised FIFA to experiment with the system at the world under-17 soccer championships in Peru, from 16 September to 2 October, 2005.

FIFA president Sepp Blatter, a strong opponent of video evidence in matches, welcomed the experiment while remaining adamant that it was not the first step on the road to introducing video replays being viewed by a fourth official.

“The board have tried to keep football with a human face and the possible errors and the only technology where the board has said yes is for goal-line technology,” Blatter said. “Now for the World Cup 2006 such a system could and should be applied when and if the results of our test are conclusive.”

Known as the “Smartball” system, the technology involves placing a microchip sensor in a ball which sends a signal to the referee whenever the ball crosses the goal line

Developed by Adidas, together with German company Cairos AG and the German Fraunhofer Institute, the Board agreed to the trial after a successful test run between Nuremburg and Nuremburg Reserves near Adidas’s headquarters.

Adidas spokesman Thomas van Schaik explained: “We are convinced in the quality of the system but we have to prove the 100 per cent accuracy of it, so that the entire football family is convinced. If not, we should not rush things.”

Goal line disputes have formed the basis of many a pub argument, with the most famous being the Geoff Hurst goal in the 1966 World Cup final – despite endless replays and lengthy analysis, it’s still impossible to be sure that the ball crossed the line.

More recently, the highly publicised Spurs ‘goal’ at Manchester United has brought the issue to the fore. Despite it being apparent to half the world and his wife that the ball had crossed the line by a metre, the referee waved play on.

Although a video replay system (like that used at cricket and rugby) would have made it abundantly obvious that the goal should have been given, football has long resisted the technology, with both fans and the governing bodies expressing the fear that it would slow the pace of the game and damage the spectacle of the sport.

Football hasn’t resisted all technological advances though, and referees currently employ a special armband, which vibrates when the linesman (or referee’s assistant, as they are more commonly known) raises his flag to signal that a player is in an offside position.

The flag and armband communicate by radio, ensuring that the referee won’t have to miss any of the action when looking for the linesman’s signals.

Although some football traditionalists will be frothing into their real ale at the prospect of new-fangled, electronic wizardly playing a part in the Beautiful Game, such innovation seems inevitable in the increasingly corporate world of international football where huge investments can hang on the balance of referee’s decisions.