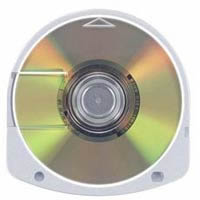 When I were a lad, an ‘entertainment system’ would take the form of a wobbly cassette player or perhaps a racy CD/radio combination for the well-heeled, but these young ‘uns today are positively spoilt for choice.

Not only can they loll around in their messy bedrooms all day and play state-of-the-art video games and music CDs on their PlayStation Portables, but now the little blighters can watch the latest movie releases too, courtesy of Sony’s proprietary Universal Media Disc (UMD) format.

Within weeks, weary parents around the country will soon be nagged into submission by persistent teenagers demanding the $28.95 (£15.30, Euro 21) to buy the cult classic, ‘The House of Flying Daggers’, scheduled for release on 19th April, 2005.

Following the initial flurry of releases in April, Sony plans to annoy parents further with the release of new titles at monthly intervals thereafter.

As a special bonus, the first million PlayStation Portables sold in the US following its 24th March release will also come with a UMD movie copy of Spider-Man 2.

Although the pricing appears attractive to the target audience, it’s the same price as regular DVD and some may feel that they’d be better off buying something with greater compatibility.