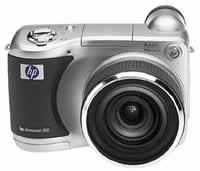 HP is making an interesting move in the digital camera market. The company’s latest technical wizardry is a system in which digital cameras could be equipped with circuits that could be remotely triggered to blur the face of those who don’t want to have their photo taken.

This story originally came around in November last year after HP had been granted the patent. We didn’t cover it then, so are pleased that our friends at News.com have brought it up again.

The design for paparazzi-proof cameras is covered under US patent application 20040202382, which was filed in April 2003 and published in October 2004, and describes a system in which an image captured by a camera could be automatically modified based on commands sent by a remote device.

It covers technology that would have to be incorporated both into digital cameras and the ‘image inhibitor modules’. Cameras would be equipped with facial recognition software sophisticated enough to single out faces for the blur treatment. The repercussions for this technology are outstanding, allowing anyone who doesn’t want their photo taken at a particular time to trigger a ‘clicker’ (image inhibitor module) to ensure that any cameras or camera-equipped gadgets in range produced only a fuzzy outline of their face. This story takes us back to the classic science fiction TV show, Thunderbirds, when Thunderbird 1 was fitted with a camera detector to stop their advanced technology being copied. At the time such an idea seemed impossible, strange how science fiction becomes science fact.

With the prevalence of digital recording devices, one of which is cameras, people will either have to become used to having their actions and utterances captured, employ impractical draconian measures such as banning them, or throw technology at it.

At Digital Lifestyles we’re keen on audio recordings and have been wondering for some time if, by identifying vocal patterns, people could opt out of being recorded.

The move comes following the proliferation of digital imaging capabilities with growing concerns about privacy, especially as the number of subjects who would prefer not to be photographed has increased thanks to mobile phones with built-in digital cameras and video functionality. However, when we spoke to HP they told us they had no current plans to commercialise the technology, which would require widespread adoption by camera makers and possibly government mandates to be practical. For now, the company is keeping the patent as part of its IP portfolio.