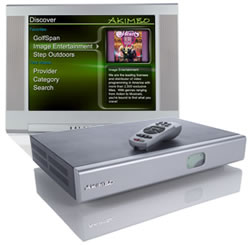 We’ve been keeping our eye on Akimbo, an IP-delivered VOD (Video-On-Demand) service and have learnt that they are launching and have signed on Amazon.com as its official retailer. Akimbo has just launched its video-on-demand service and signed on Amazon.com as its official retailer. Akimbo is to video what Apple’s iTunes is to the iPod. The Akimbo Player, utilising an easy “Queue and View” format is a set-top box that delivers hundreds of mainly niche program videos to television through a broadband-Internet connection allowing consumers to choose content and view it on-demand – or maybe even later.

Amazon.com will be the exclusive retailer for the 2004 holiday season, and the Akimbo Player which can hold about 200 hours of video, is now available in the Amazon.com Electronics store for US$229.99 (~£125, €180) [Buy]. Consumers can sign up for the Akimbo Service by visiting their site at a cost of US$9.99 (~ £5, €8.10) a month. Sadly, for content licensing reasons we assume, it’s only available in the US currently.

The service offers consumers 50 categories of content, including mainstream, classic and independent films, foreign language, news, health and fitness, sports, children’s programs, and education. At no additional charge you can download old series such as “The Jewel In the Crown” from Granada International, consult comprehensive independent film catalogues from Undergroundfilm, GreenCine, Amaze Films, and IFILM.  Or you can receive news specials and features from CNN, more conventional classic movies from Turner Classic Movies and cartoon episodes from the Cartoon Network. Premium services are also available for access to foreign language programming.

The Akimbo Player utilizes widely adopted technology for playback including Windows Media 9 technologies for audio and video compression, and digital rights management. The Akimbo Service automatically delivers an onscreen program guide and subscribers choose which programming they would like to download to the Akimbo Player. Then, each time Akimbo Service subscribers turn on their TVs, they have new videos, previews and editorial information waiting for them.

Akimbo has competition from other VOD suppliers waiting in the wings, including Disney’s Moviebeam, TiVo and Netflix, all who have plans for 2005.