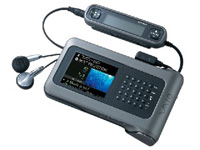 Dell have come up with a slightly controversial deal to attract customers who are disgruntled with the iPod’s less than impressive battery life: tempt them to buy a Dell DJ as a replacement by offering them US$100 (€82) for their dud iPod. With the rebate, this makes the 15gb music player half-price.

Dell are clearly capitalising on the iPod’s “dirty secret” – that promised eight-hour battery life doesn’t stay eight hours for very long. Battery inefficiency and memory effects mean that after a year or so, some users are lucky to get two or three hours of tunes out of their player, with some reporting batteries that have completely given up.

Apple have recently introduced a US$99 replacement service for players that are more than a year old, but Dell’s promotion is aimed at enticing iPod owners to jump ship by offering a shiny new (though less capacity) player, with 25 free downloads, for the same price.

“Is your iPod battery starting to fade? Before you pay for a replacement battery for your same old device, consider upgrading to a brand new Dell 15GB1 DJ with more than double the battery life”, yells the website.

In other portable music player news, Sony have unveiled two new portable players – the Network Walkman Player NW-HD1 and the Vaio Pocket VGF-AP1L. Sony don’t make cars because you wouldn’t know if you were looking at the model name or the registration number.

The NW-HD1 is a 20gb player for US$400, and is claimed by Sony to be the smallest in its class. It also incorporates 256mb of Flash memory too.

The VGF-AP1L is a 40gb player with a 2.2 inch colour screen for displaying photos and album artwork and is US$500. The player also can store photos from Cybershot cameras, rather like the iPod’s picture storage function, with the upside that the Vaio player can actually display them.

To put further pressure on Apple, both devices will work seamlessly with Sony’s new music download service, Connect. Supported formats are MP3, WAV and WMA, but no AAC – so Sony Walkman owners won’t be doing much business with iTunes. Given that they invented the entire portable music player market with the Walkman, if anyone can compete with the iPod, it’s Sony.