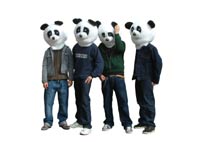 Panda Babies is the new album from Super Smart, a German four-piece band – and it’s only available as a series of mobile phone ringtones.

There are many aspects of this story that make me want to leave my office and go and live in a cave but I can’t deny that it’s innovative and turns the entire music publishing and purchasing model (which is already in disarray anyway) on its head.

The album is, apparently, a sort of disco-pop/electro-punk affair and is published by Go Fresh Mobile Music.

Antonio Vince Staybl, GMM founder, describes the thinking behind Panda Babies: “Music has to be re-thought. 20 Euro for an inflexible album, lowest margins for artists as well as the loss of image of CDs, which are nowadays distributed everywhere free of cost as give-aways, necessitate an immediate change in thinking.” Toni Werner Montana, boss of the label, adds: “We release songs within a few hours Europe-wide without interfaces to the classical music industry. Our prices for a ring tone album or a compilation of ten to twelve tracks including a mobile phone video will settle down at four to five Euro and the price for a single ringtone at 1.49 Euro in the medium-term”.

As part of the project, the band wear panda heads to protect their identity – though from whom, I’m not quite sure. Me, possibly.

If anyone would like to send us a review of the album for publication here – please feel free to contact us. The best one wins something terrible out of my record collection, chosen at random.