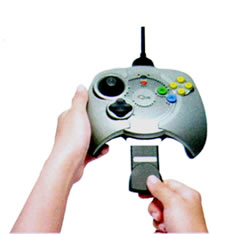 As details emerged of the IQue Player (rough translation, God’s Playing Machine), we realised that its form would be a handheld games controller that plugged directly in to the TV, doing away with the box under the TV. Based on N64, which at its original launch in 1996 was one of the most powerful consoles available, Nintendo clearly plan to leverage its large amount of licensed game content to run on it – very clever when you consider it is currently just sitting earning nothing. It also has hardware-emulation of Nintendo’s pre-N64 console, the Super Nintendo, enabling it to play the enormous library of games that were available for it. The games will be converted to Chinese language and, to minimise piracy often perceived as a problem in China, games will be loaded on to the 64Mb Flash-based memory cartridges at local retailers and will be, at least to Western standards, very cheap.

Time and thinking has moved on a long way from the N64 and the IQue Player benefits from a number of innovative features. It will be launched with one full game and four other demonstration versions of titles will be preloaded on to the cartridge, that will last for between one and ten hours of playing before removing themselves. As touched on above, the new software will be distributes electronically to shops located around China and will be loaded on to Flash memory cartridges at the shops. The operating system, dubbed UOS, is automatically updatable when new games are bought and installed, this may well be to ensure they stay ahead of hackers attempts to copy games.

Two site have now published the first European reviews of the IQue Player, one in English and another slightly more technical one in German.

The video games and content worlds will be watching the progress of this platform in China, not just to get a grasp of the level of enthusiasm for gaming in China, but also for the success of the anti-piracy measures and to see if they are prepared to pay for reasonably priced content.