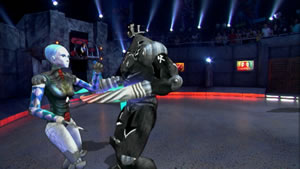 After all the hype, the BBC’s virtually-virtual gameshow Fightbox [Preview] finally premiered Monday night on BBC3.  Four contestants brought their self-created virtual warriors to the arena to do battle in elimination and combat competitions against the shows computer-generated opponents – all in a studio with a “Real Life” audience.  Without a doubt, the first night’s episode was a tentative start to the series.  The contestants seemed nervous, perhaps awed by playing a computer game in front of a live audience, and the presenters weren’t especially gregarious either.  But it was just the first of 20 episodes and Fightbox hints at good things to come.  It had flashes of how’d-they-do-that wizardry and, most important of all, it grasped the possibility of cross-platform interactive programme making with both computer-generated pincers.

First, the good points.  The set is fantastic.  Unlike Time Commanders’ set, this one works exceptionally well, managing to look both futuristic and ancient at the same time.  For instance, the contestants are seated in cage-like pods that rise above the arena floor giving them a birds-eye view of the virtual action.  Yet references to Gladiator (the TV sport/gameshow from the early 1990’s) as well as its classical Roman inspiration are clearly evident too.  Next, the camera-work.  Top marks for wow-factor here on two counts.  First, Fightbox is (or claims to be) the first programme in which free-held cameras are used to combine both real and virtual images simultaneously.  To my eye, there didn’t seem to be any hiccups or glitches and I certainly couldn’t see the “seams.”  Second, there were some really fantastic camera angles that helped bring the best from the virtual graphics.  For example, there were a couple of 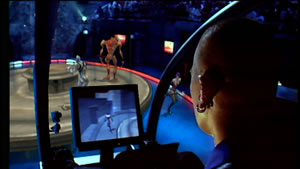 over-the-shoulder shots (right) of the contestants which showed them in their pod displaying their computer monitor action in the foreground, in the middle-ground the virtual arena action and finally the real arena and audience action in the background.  In another, there was a low shot from the arena floor looking up through one of the virtual challenges, the helix.  Both these shots, amongst others, helped to create depth of vision, contributing a sense of scale and density to the action.  At no point did the huge arena appear to be empty even though, in the “Real World” it was.  (In reality, the studio audience watched the gaming on a massive screen.)  I ought to mention the graphics too.  Although gamers’ expectations are always increasing, visually the graphics in Fightbox are fairly good.  There was a consistency between the studio lighting and the graphics which was so good that virtual shadows were created which matched the real ones.  Now that’s attention to detail!

With the good comes the bad.  There were Cheerleaders. Cheerleaders?  I can, almost, see the reference point since the MC repeatedly called Fightbox “a new sport”.  However, as any occasional viewer of American Football will testify, the Fightbox ladies’ efforts were half-hearted by comparison.  And what’s with The Weakest Link-style ridiculing of the losing contestants that the cheerleaders and the presenters indulged in?  That is unnecessary – The Weakest Link is so over.

Although it was the beginning of a new show, I’m not sure about the choice of presenters.  Trevor Nelson is great as the host of music-related programmes but he doesn’t seem to be all that interested in gaming, as his comments in this weeks’ Radio Times attest.  As for Lisa Snowdon, I’m afraid I find it very difficult indeed to forget the LA Pool Party colonic irrigation episode.  But maybe that’s just me.  There was one moment when Lisa attempted to react to one of the Sentients, which was truly awful – she was wooden and the timing was out-of-synch.

Finally, to be perfectly honest, there are some problems with the Fightbox game itself.  First, the contests are exceptionally simple.  On the one hand, simplicity is necessary since it would be tedious in the extreme if the whole episode were spent explaining the object of the tests to the audience.  However, I anticipated contests with a bit more action and was, a bit, disappointed by what was delivered.  I sure hope there’s more on offer on the PC/console game.  Also, the Sentients’ movements seemed more technically developed than contestants’ warriors.  Although the contestants had time to practice with their warriors before the TV episodes were filmed, their warriors didn’t seem nearly as agile as the Sentients.  I’m not suggesting that the game is one-sided, because it isn’t.  It simply looks like the Sentients can execute more moves with greater accuracy.  Also, when a Sentient and a contestant warrior went virtual toe-to-virtual toe, the fight action seemed a bit slow – as though there was a lag-time between the contestant’s command and the warrior’s action.  Either that or the editing wasn’t as fast-paced as viewers have come to expect from action sequences.  But all these problems are minor and thoroughly fixable in future versions.

Fightbox also highlights a few conundrums that content-makers may face.  My main questions are about the concept of image ownership.  If Madonna can be sued for drawing inspiration from photographs that she freely admits to admire and a past athlete can file a similar suit against a telephone listings company, when does homage become theft?  In respect of Fightbox, this question is particularly relevant in two separate instances.  First, two of the Sentients bear striking resemblances to pre-existing characters:  Kodiak is a lot like Wolf from Gladiator (he even did the signature haunchy growl pose) while Nail seems to be a combination of the monsters from the films Alien and Predator (the MC described her as a predator).  Second, what about the contestant-generated characters?  One of the contestants from last night’s episode frankly described her warrior as inspired by Tank Girl.  And there was a frankly acknowledged resemblance.  Undoubtedly there are other competitors whose warriors were similarly inspired by pre-existing content.  In the high-stakes world of international rights are the creators of Fightbox treading the boundary between inspiration and imitation?  How, if at all, will this affect the sales and distribution of Fightbox to other territories?

Has Fightbox given a glimpse into a new way of thinking about entertainment programmes?  I think so.  Despite its faults, Fightbox is a good concept.  Although costly and time-consuming to develop, it is clear that every aspect and angle of Fightbox was considered in the creation of the end-products – vital if a consistent feeling of quality is to achieved and maintained across the platforms. From the development of overall visual aesthetic to the interplay between the online game and the television programme, Fightbox provides a clear example of the benefits of “through-development.”  Rather than being a web-based game with a TV bolt-on (such as the peculiarly addictive Celebdac) or a TV programme with an after-the-fact web presence (such as just about every other TV programme) Fightbox is the first programme I know of in which the platforms are truly inter-dependent.  Its makers, Bomb Productions and Ricochet Digital, have every reason to be proud.  Fightbox is very likely to become a reference point for future entertainment developers.  I’ll be tuning in again tonight.

Buy the FightBox game at Amazon UK on PC, PS2 or GBA

Heidi Jacoby-Ackland (not her real name) is a misanthropic Anglo-American living in North London. She has dabbled in programme-making for nearly eight years, worked with some of the most inspiring and intelligent women in British television and, it must be noted, some of the most vain and unethical men. Having recently checked-out of the madness, Heidi has spent the past year re-discovering her passion for good stories. She spends too much time watching television and way too much time pondering the future. Heidi dreams of someday having the Gaultier dress she couldn't afford in 1993, a grey Siamese cat called Elvis and a house with a Southern exposure so her plants will stay alive. Since she accidentally found her ideal partner ten years ago, Heidi is currently searching for a two-bedroom garden flat with off-street parking and good water pressure. View all posts by Heidi Jacoby-Ackland