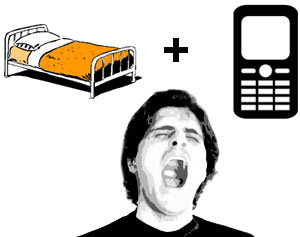 Folks partial to a bit of late night nookie chat over their mobile phone may want to take a closer look at new research from scientists at Sweden’s Uppsala University and Karolinska Institute and Wayne State University in Michigan, US.

The boffins studied the effects of using a mobile phone before going up the wooden hill to sleep, and found that people exposed to phone radiation took longer to reach the deeper stages of sleep, and spent less time in that state.
END_OF_DOCUMENT_TOKEN_TO_BE_REPLACED

Mickey DeLorenzo is a man on a mission – to prove that it’s possible to lose weight just by playing his Nintendo Wii.

He’s been the same weight for the last two years and while maintaining his normal diet, complete with the usual Christmas indulgences in food and drink, he managed to lose nine pounds and nearly 2% of his body fat by playing for 30 minutes a day. 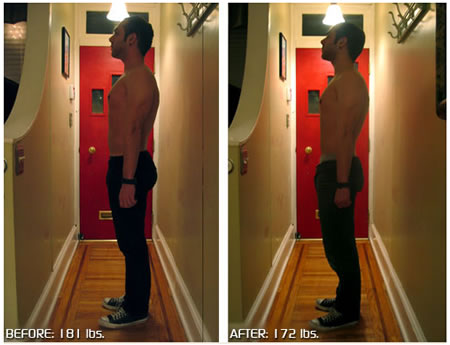 By his own description, he played it in a “semi-aggressive way.”

I moved my feet, I used full body motion, and I swung my arms to mimic the real thing. If you just stand there and make small moves or sit on the couch and play, I don’t think you’ll see much, if any results regarding exercise.

Oh the pain
It wasn’t without pain, but as they used to say in the 80s, no pain, no gain. 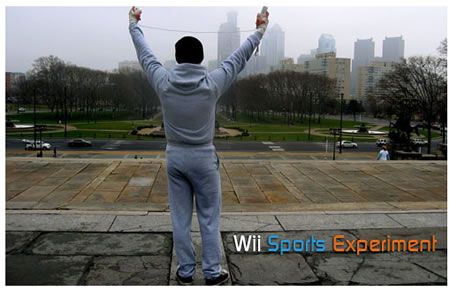 He got hit with two types of pain – physical pain as well as tech pain. On the physical pain side, he report that “my first 3-5 days were brutal. I was sore from shoulder to wrist, I even went as far as purchasing an Icy/Hot patch to sooth my pain.”

The tech pain was him smashing the screen off his girlfriend’s laptop during a game of Wii bowling. We suspect this accident then lead to further physical pain inflicted by his missus.

The details that he presents on the site are pretty extreme, with obligitory graphs too. Those things combined with the subject make it ideal Digg food, and as we write this, we see the article has been Dugg 3655 times.

I did a similar test with the Sony EyeToy a couple of years back, using Kung Fu that came with EyeToy Play. It really got me feeling good, but my appoach was _far_ less scientific. Reading this gives me the impetus to try it again.

Nintendo must be jubliant about this story – providing the perfect excuse for children to pester their parents to buy a Wii.

Hats off and well done Mickey. 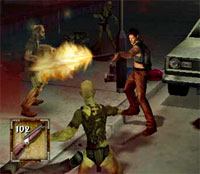 The New Scientist is reporting that US researchers have discovered a brain mechanism that may link violent computer games with aggression.

Although not conclusive, the study suggests a causal link between virtual and real world aggression.

Previous studies have concluded that violent video game players are “more aggressive, more likely to commit violent crimes, and less likely to help others”, but critics argue that this just shows that violent people gravitate towards violent games, so the games aren’t responsible for turning little Timmy into Ivan the Terrible.

A team led by Psychologist Bruce Bartholow from the University of Missouri-Columbia discovered that fraggers show diminished brain responses to images of real-life violence, such as gun attacks, but not to other emotionally disturbing pictures, such as those of dead animals, or sick children. 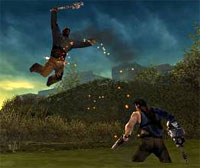 Bartholow argues that this reduction in response is correlated with aggressive behaviour.

Employing technology so advanced that mere mortals wouldn’t even know how to plug it in, the team measured a brain activity called the P300 response, which is the characteristic signal seen in an EEG (electroencephalogram) recording of brain waves as we see an image (like us, you already knew that, didn’t you?)

This P300 response whats-it reflects an evaluation of the emotional content of an image, so the bigger the response, the more people are surprised or disturbed by an image. Novel scenes also register a big response.

The team shipped in a crew of 39 gamers, and quizzed them on the amount of violent games they played, before being shown a series of neutral images interspersed with occasional violent or negative (but non-violent) scenes, while sensors recorded their EEGs.

The full-on fraggers with the most experience of violent games were then found to register a smaller and delayed P300 response to the violent images.

“People who play a lot of violent video games didn’t see them as much different from neutral,” says Bartholow, with the research finding that although desensitised to such scenes, their responses were still normal for the non-violent negative scenes.

Although this may not exactly be big news – video games have been used to desensitise soldiers to scenes of war – players with the greatest reduction in P300 brain responses were found to dish out the severest “punishments” against fake opponents in another game.

Throughout the tests, the violent games experience and P300 response were still strongly correlated with aggressiveness.

“As far as I’m aware, this is the first study to show that exposure to violent games has effects on the brain that predict aggressive behaviour,” says Bartholow.

Not everyone is convinced though, with Jonathan Freedman, a psychologist from the University of Toronto commenting, “We habituate to any kind of stimulus. All we are really getting is desensitisation to images. There’s no way to show that this relates to real-life aggression.”

Freeman also added that stopping people playing violent video games would be like banning them from playing sports such as football or hockey.

The work will appear early in 2006 in the Journal of Experimental Social Psychology.

Professor Sir William Stewart, chairman of the National Radiological Protection Board (NRPB), today published a report of the emissions of mobile phones. He said he believed that mobiles may pose a health risk, although this was not yet proven. He said “If there are risks – and we think there may be risks – then the people who are going to be most affected are children, and the younger the child, the greater the danger.”

Following this, Communic8 the company who sells MyMo, a mobile phone specifically for use of children between 4 and 8, announced that they were to stop selling it immediately.

We spoke to Adam Stephenson of MyMo and he said “After listening to the the tone and content of Sir William Stewart on the Today programme on Radio 4 this morning, we have decided to stop selling MyMo.” He went on explain that they had read between the lines to see a considerable risk. “The idea behind MyMo was to protect children. We have no intention of exposing children to any danger.” While pointing out that no one in his company were medical experts, he went on to say “We feel it would be foolish to challenge their findings.”

The MyMo offered a simple ‘cut down’ mobile phone with three buttons on it that enable pre-set phone number to be called easily. It was licensed from a company in Germany and is still for sale in Italy and in the Netherlands, through KPN.

This is the second piece of research within a month, flagging the possible dangers of mobile phone emissions. The last study, majority-funded by the European Union, has found in December that in laboratory conditions, radio waves from mobile phones harm body cells and damage DNA.

Imagine the advantages of being able to send high-definition video of a patient from an ambulance to a hospital via cell phone. It will happen nation-wide in Japan from next April.

A collaborative project by the National Institute of Advanced Industrial Science and Technology (AIST), the Tsukuba Medical Centre Hospital, and the Tsukuba Fire Headquarters has developed such a system that can do just this. Simply at the flick of a switch, paramedics will activate the system to enable a hospital doctor to examine a patient via remote control video camera using the new technology that has made it possible to compress high-definition image data sufficiently to allow its transmission via cell phone.

According to national statistics in Japan, it takes an average of 21 minutes to transport an emergency patient to hospital.  These high-definition images though, will make it possible for doctors at the receiving hospital to give critical, timesaving and appropriate advice to paramedics, with obvious positive implications for the survival prospects of the patient.

To implement the system, ambulances will need to be modified to carry a video camera, laptop computer and special antenna, and AIST say the system will be tested in the city by the end of the year and will go on sale nation-wide in April.

This is the first time we have heard of video from a moving vehicle being used for medical diagnosis and treatment. Fixed-location use of video is now becoming common place, in deed a story in News.com this summer highlighted the importance of being able to avail of expert instructions remotely, when cardiac surgery on a patient in Guam was led by physician, Dr. Benjamin Berg in front of a computer screen 3,500 miles away at Tripler Army Medical Center in Honolulu. He dictated the procedure to a less experienced colleague, monitoring every move with a high-resolution video camera.

AIST already has a track record in using technology to advance medical practice, having developed a therapeutic robot seal called PARO in collaboration with Microjenics. In February 2002, the Guinness Book of Records acknowledged the PARO robot as the most therapeutic robot in the world. AIST has licensed all PARO’s intellectual property rights to its affiliated venture company Intelligent System (ISC), who plan to introduce the robot to nursing homes for the elderly.