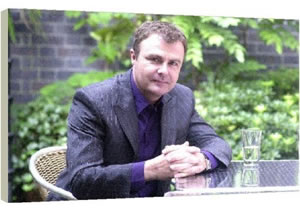 One of the fears/ dangers of opening up to public comments on a Web site is that someone will get involved who has the ability to produce words at a remarkable pace and those words will be destructive. Another outcome is that they’re hilarious.

We had direct experience of fast-paced posting on Isle of Wight News site, VentnorBlog, when a couple of years back, someone started a Biscuit Survey thread on the discussion forum.

A series of poets starting with Rimbaud, Verlaine and Ginsberg, started a ‘discussion’ about biscuits – all in quick succession.

We let it run, leading to the thread attracting over 46,000 views.

Amazon hilarity over Paul Ross canvas
We know that Amazon has been, from the outset, very concerned about rogue reviews. They’re very hard to identify, therefore difficult to stop when you’ve got half of the world’s output available for sale and review on your site.

Today we got a pointer from @georgiawonder to a photo portrait of Paul Ross (non-famous UK TV presenters) printed on canvas.

At first we didn’t get it – a picture of Paul Ross!, for gawds sake! – but as soon as we started reading the reviews, we actually fell off our chairs laughing.

Someone, or a number of people, have clearly taken this on as a creative writing project. We’re very grateful that they have too. It’s fantastic!

When we first looked at it this morning there were 59 reviews. Refreshing just now, we see that this has risen by about twenty.

Here’s a selections of our faves, but please do go and have a look …

As a long-term Paul Ross devotee, I bought one of these for the priome spot above the mantelpiece in our living room. It looked fantastic, and made for a wonderul conversation piece, people would comment on the incredible realism and how it seemd to be “almost alive”, and the usual cliche about “the eyes really follow you round the room”. But it WAS very lifelike, and sometimes when I entered the room and glanced at the picture it was as if Paul was up to something, as if he had just been moving about and jumped back into his stationary postion upon my entrance. I found myself darting into the room to try to catch him in the act, but I was never quite fast enough.

One night I returned home from work to find my wife sitting on the couch, seemingly staring into space. At first I thought she was watching TV but it was switched off. Her face was fixed in an expression of mild dismay, like someone who has reluctantly accepted a terrible fate. I waved my hand in front of her face, to no response. I pinched her gently on the arm. Nothing. Slightly harder. Not a flinch. I was shaking by this point, and about to dial for an ambulance, when I realised she was not staring into space at all. I followed the direction of her gaze, and to my horror I realise she was staring straight into the malevolent eyes of Paul Ross’s image.

Quickly I leapt to the canvas, and clawed at it with my fingernails, tearing through it’s surprisingly high quality lacquered finish in a blind panic, trying not to catch his eyes in fear that I too would fall under his evil spell. When eventually the picture was nothing but tattered shards, I turned around to see that my wife was woozily coming to, and her ordeal was coming to an end, his icy grip on her heart was loosened just in time.

Please, even though it is so appealing and such great value for a high quality item, resist temptation and do not buy this picture lest you to come to the same fate, and perhaps by the time someone comes to your aid it will be too late.

As a busy working mother of two, who’s a mother, and a businesswoman, and busy, I don’t have time to mess around. I need food on the go, and a toothpaste I can trust. I also need to know that, when I need to know that my Paul Ross print is over the mantlepiece, it really IS over the mantlepiece. This one is. Which is what I like about it. My husband, meanwhile, who’s a busy working father of two, who’s a father, and a businessman, and also busy (except every second Tuesday when bellringing practice from 4pm-5pm is his only commitment) likes the fact that this Paul Ross print is wipe-clean. (My busy working husband has occasionally spilled his yoghurt over Paul’s jowly mancheeks.)

This is NOT a portrait of Eamonn Holmes. I made this mistake and words can’t begin to describe my disappointment when I tore at the packaging to expose Ross

Unsurpased in his presenting style, the Paul Ross 20 inch canvas magnificently encapsulates all that is wonderful about the man. The sturdy build, the pleasing aesthetics, the longevity of frame and the healthy glow all lay testament to why Mr Ross is a God amongst presenters. Like Mr Ross, the print is honestly presented, displaying the sincere expression and relaxed pose that makes us all feel a little better about ourselves.

It has been suggested that the the picture has healing qualities, but forget those fripperies. This is Mr Ross! The simple matter of having the sauve, witty Paul Ross in your home should be the paramount pleasure.

For years I have scoured the internet searching for various Paul Ross affiliated memorabilia but never have I unearthed such a poignant reminder of the majestic beauty that is the one and only Paul Ross. Amazon, I salute you for bringing this truly remarkable work of art to my attention.

Along my travels of the vast cyber kingdom of the internet, I have acquired items such as The Official Paul Ross Superking Size Bedspread (my ladyfriend is probably more fond of this item than I am!), Envy and Other Sins (Why Can’t I Be My Brother?) – the offcial autobiography of Paul Ross, which provided a deep insight into Mr Ross’ battle to refrain from displaying his utter contempt for his far more successful sibling. All of them pale in significance when compared to my 20 inch print of the king of all that is Ross.

All deeply fantastic … and thank you for whoever is behind this.