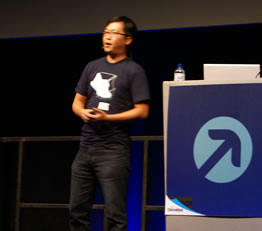 FOWA or the Future of Web Apps, took place at the Excel in Docklands on the 8-10th of October 2008 with the conference running on Thu/Fri.

FOWA was all about Web 2.0 or maybe even Web 3.0 or maybe that’s Web 4.0? Which ever way, it’s about the future of Web apps. You’ll have noticed that the clue is in the name.

Busy
There’s a huge amount of activity in developing Web “applications” which may be stand-alone or more than likely able to work with other web apps that are out there. That’s their beauty, but it all gets horridly confusing for a Web -1.0 people where the Interweb wasn’t (it was more the Internot) and people still using DOS.

What was really surprising was how busy the conference was (especially the Diggnation filming – but more on that later) and how young it was, most of the people (were they people? – definitely geeks) were under 30. But there was a noticeable buzz and you felt you were part of something.

FOWA is organised by Carsonified, a new media agency set-up by Ryan and Gillian Carson. As well as organising conferences (FOWA, Future of Mobile, Future of Web Design, Fuel) they also develop Web 2.0 applications and run an on-line magazine, Vitamin.

Ryan seems passionate about what he’s doing, which is maybe why there’s such a buzz to the whole thing. 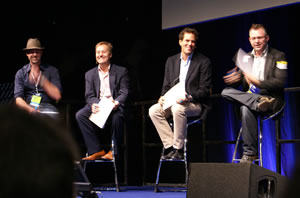 Talks
There were two main streams and lots of mini “university” talks in little booths around the conference.

Due to other engagements I only attended the last day, so my report is limited to that. Simon covered some of the talks live at the event on the Thursday.

Dave Morin from Facebook talked about the new Facebook Connect system which means other sites can hook into Facebook simply (which is now out in beta).

Bret Taylor from FriendFeed talked about relevance and how FriendFeed is trying to make it easier to sort out what’s relevant and what’s not. 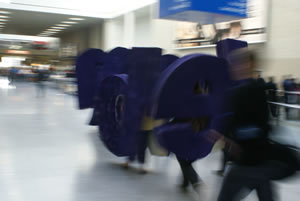 Gavin Starks (and industry veteran) of AMEE (a neutral aggregation platform to measure and track all the energy data on Earth) gave a talk on minimising the environmental impact of your application (covered elsewhere).

A nice chap won £5,000 from Adobe for his Adobe AIR idea which he pitched to Andrew Shorten (Adobe), Ryan Carson (Carsonified) and Richard Moross (Moo).

The main auditorium then started to get quite rammed (with queues forming outside), why? Mark Zuckerberg was about to be interviewed by Ryan Carson (well a fireside chat, minus the fire – which is difficult in front of a packed event) and it turns out wasn’t the main reason …

There were obviously many more, but these were the ones that grabbed me. 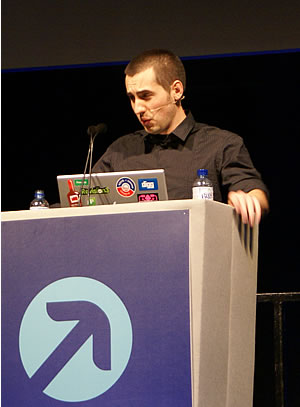 Diggnation
Diggnation is a show about various top entries submitted on Digg hosted by Alex Albrecht and Kevin Rose (who happens to be a founder of Digg and of Revision3 who produce Diggnation).

It was like a boy band had arrived with mass hysteria ensuing, but it was mostly the boys in the audience that were getting most excited. Beer was passed out into the audience which only helped increase the adulation.

It was very odd watching an audience go this crazy – Internet media moguls are in town.

Other interesting things
Google had a stand with nothing in it – just the signage which said “Google Beer” and at 7.30 the beer appeared, it didn’t last too long, due to a considerable demand.

Digg and Facebook after-party at the Fox. There was some more free beer and Alex and Kevin gave away some stuff. Mark Zuckerberg didn’t seem to be there, but Dave Morin was.

The only downside to it being in Docklands … make sure you get the last DLR out … it’s an expensive journey if you don’t!!!