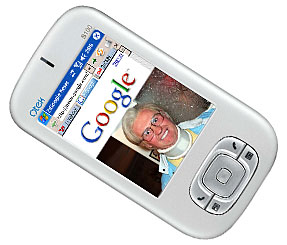 As unexpected as the sun rising in the morning, new research figures reveal that Google continues to be the boss, the head man, the top dog, the big cheese and the head honcho in the world of mobile search.

Leaving its competitors floundering about like a wet fish in a tub o’lard, the search engine kings surged miles ahead of its competitors in the first quarter of 2008, according to Nielsen Mobile.


The study showed that Google jogged right on to grab a hefty 61% of the market, Yahoo limped around miles behind in second place with 18%, while Microsoft’s MSN could only muster a piddly 5% for third place. “But what are these people searching for?” we hear you cry, thirsty for knowledge and enlightenment. Well, it seems that most mobile punters whip out their handsets to seek “general information” (whatever that is), while 29% of Google users and 24% of Yahoo users were on a quest for local information.

With Google already snaffling around 68% of the Web search market, the company is keen to stay on top of the mobile search market hill, with a hand-rubbing Google CEO Eric Schmidt recently noting, “Mobile looks like it will ultimately be the highest of ad rates.”

The growth of location based services powered by mobiles with built-in GPS look set to keep the tills ringing in this sector, although punters aren’t exactly digging the experience right now: Nielson’s study found that only 44% of mobile Google users and 40% of mobile Yahoo users rated their experience toward the high end of the scale.

One thought on “Google Lords It Over The Mobile Search Sector”