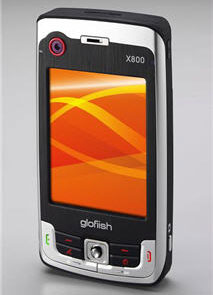 Jam-packed with the latest mobile innovations for the connected-exec-about-town is the new Glofiish X800 smartphone which is about to start shipping in key markets in about, ooh, two shakes of a lamb’s tale.

Sporting a two-tone silver and black design that can best be described as ‘industrial’ and ‘functional’, the X800 squeezes in an integrated GPS receiver, HSDPA radio and a large 2.8 inch 640×480 VGA touch screen display.

There’s also a two megapixel camera onboard (and a front mounted VGA jobbie for video calls) with connectivity options including 802.11 b/g Wi Fi and Bluetooth 2.0m with a fairly beefy 1530 mAh battery keeping the lights on. 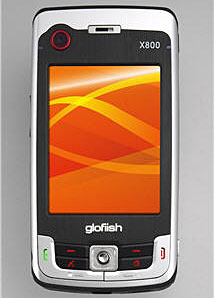 Running on the near-ubiquitous Windows Mobile 6 Professional, the X800 sports a quad-band GSM radio and HSDPA support (for AT&T 3.5G), and is motored along by a Samsung SC3 2442 500 MHz processor, with storage options being adequately catered for in the shape of 256MB ROM, 64MB RAM and a microSD card slot

The GPS bit is powered by a SiRF Star III GPS receiver chip, so users should get a fix a lot quicker than the notoriously slow Nokia N95 phone. 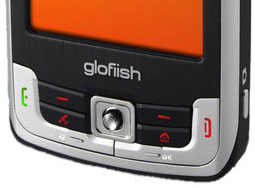 We haven’t had a chance to play with it yet, but makers E-TEN have added a new mobile shell, offering an ‘easy-to-customise’ interface that lets users choose what information to display on the Today screen and provides nippy access to the photo speed dial, weather forecasts and world time.

Eagle eyed readers may have noticed that the Glofiish comes without a keyboard (there’s nothing sliding up, folding out or swiveling around here) so expect the usual heap of compromises involved in virtual screens (we hate ’em). 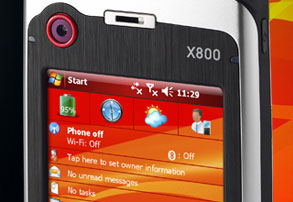 Despite being stuffed to the gills with technological goodness, the Glofiish is no whale, measuring up at 113.5 x 60 x 15.8 mm.

Pricing and availability differs from region to region, but the Glofiish should be swimming to a store near you some time soon.