This just feels wrong on just about every level we can think of, but in an attempt to reach out to Da Yoot, the US Army have created a slick and highly polished MySpace recruitment site.

The page – a heavily customised number – features a rather spooky looking Sgt Star character who implores you to strike up a chat.

Sadly, any hopes of an in-depth chinwag about the merits of unsigned death metal bands are quickly dashed when clicking on the icon transfers you off MySpace to a ‘Go Army‘ site. 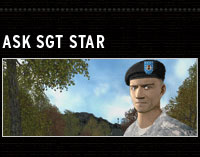 A warning next to the psychopathic-looking Sgt Star warns, “The information you enter is to be used only for recruiting Soldiers into the U.S. Army and the Army Reserve.”

Still, we thought we’d give him a go anyway and typed in, “We want to go to Iraq and kick some ass,” but were immediately warned to mind our language by the disembodied computer voice of the strangely unblinking Sgt. 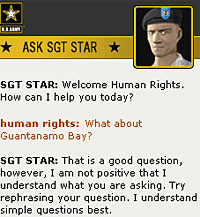 We apologised: “OK. Sorry. We want to go to Iraq and bomb some soft Johnny Foreigners back into the Stone Age in the name of peace.”

The Sgt didn’t seem to understand.

We tried a few probing questions about Guantamano Bay and human rights but the Sgt wasn’t having any of it, delivering a terse lecture about needing American citizenship to become a US soldier, so we decided it was time to leave (after childishly testing the bad word filter, natch).

Back on the MySpace site, the US govt has spared no expense in its quest to coax sofa-loving music fans into a life of short haircuts and being shouted at, offering a free download of a video game with lots of, like, cool explosions, big guns, missiles, more guns, backed by a high octane techno soundtrack. 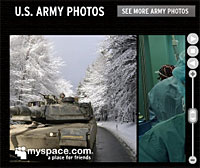 Clearly a sizeable wad of defence budget has been thrown at the slick game, which purports to offer realistic battlefield scenes (although we couldn’t find any options to rain friendly fire on Brit troops and then try and cover up the investigation afterwards.)

And if all that hasn’t convinced America’s surfers to sign up, there’s loads more goodies on the site, including a video going on about “The New Army Ethos,” free wallpapers, podcasts, RSS feeds and action pictures of fun-loving, Oakley-toting soldiers doing rad things like skydiving, driving man-sized va-he-icles, holding big guns and helping lots of poor people (if they’re not busy carpet bombing them, natch). 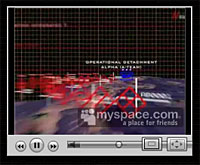 Of course, there’s sound business reasoning behind the US Army shoving its shiny size nines onto a social networking site like MySpace, with the site able to interact with the community, make friends and receive comments and – possibly – make the Army look vaguely cool and enticing.

But we just wish they’d bugger off and leave it the bands.

One thought on “Army invades MySpace”