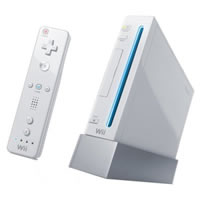 The organisers of Game On, clearly have amazing contacts with the games industry having been running the exhibition for the last four years around 11 venues around the world. It’s contacts like this that has led to them getting hold of Sony’s PS3 and Nintendo before it’s launched in the UK – four months in the case of the PS3.

The Science Museum is currently the only place in the UK where Joe Public can play the PS3. There’s a couple of places around where the PS3 can be seen, but like the venue off Brick Lane, they’re invite only.

Even if you could get to see the PS3, not other venue has the PS3 right next to the Wii, so you can compare them.

So what are they like?
The PS3 is playing Motor Storm and it looks stunning, with amazing photo realism. The action is intense and it’s very clear that this is a major leap forward in gaming. The controller can be set in a mode where its physical movements control the action of the onscreen action. Being used to playing the PS controller without this, it take a little while to get used to the sensitivity on the movements needed to control it.

The Wii clearly has the movement sensors built-in (it’s the big selling point of the whole console). Playing with them is near-instantly understandable – feeling natural to wave your arms around to control a tennis racket or box the hell out of your opponent. The graphics are far simpler, delivered in the normal Nintendo cartoon style.

It is of note that the PS3 has a significant number of venting holes in its casing and a large fan under nearth to cool it – it draws 350w. The Wii doesn’t have any venting.

Who’s going to win?
If sales are going to reflect the public interest here at the Science Museum today, Sony need to look out, because the Interest in the Wii far outweighed that in the PS3. This could be down to the affordable price of the Wii, or indeed that the public actually have a chance of own it this side of xmas.

Speaking to the punters here, the feeling was that the Wii would give far more of a gaming experience, not just the gloss that the PS3 gives.

It’s no exaggeration to say that some people were literally running into the exhibition hall, shouting, “is it here, is it here?” as the made their way to the Wii. I had thought it would have been the other way around, with the PS3 being the big draw.

The rest of the exhibition is well worth the visit alone – charting the history of video games from the start, and put together with a lot of intelligence. With the Wii and PS3 added to it, you can expect large queues at the weekend.

We had a chat to the event organiser, Gaetan Lee to get an overview of how he got the hold of the Wii and PS3 before their UK release and the background to the Game On exhibition.