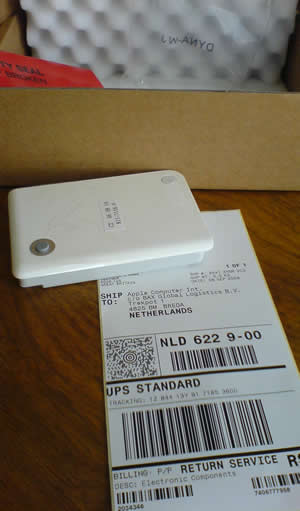 The exchange of Apple’s might-catch-fire batteries is happening faster than originally anticipated.

When the news broke that Apple were recalling their Sony-produced batteries, they were talking about it taking four weeks to get the batteries out.

We duly went on to the Apple site and filled out the simple form, receiving a conformation mail telling us we should expect delivery in four to six weeks.

You can imagine our surprise this morning when what should arrive via the UPS courier, but the new battery, under two weeks from the original order.

It makes sense for Apple/Sony to swap these batteries as soon as possible, as many customers may be getting The Fear about their machines bursting into flames, I know that I’ve thought twice about leaving mine charging overnight.

If you’re interested, the batteries look identical form the outside, but we’ve found that the replacements have a higher battery capacity 4607 mAh vs 4400 mAh of the original. The new one certainly has loads more than 2846 mAh that our 14 month battery has ended up with. Translated – what you end up with is better than the original.

There’s a form and box to return the original battery, again via UPS. No wonder Sony estimated the recall could cost them as much as $257m (30 million yen).