Ricoh are making big claims for the low light capabilities of their new image processing engine, which works with the built in CCD-shift vibration correction method to produce what they describe as, “high quality images at even higher ISO settings with low noise.”

The new model looks very similar to the R4, but there’s been a few changes in the physical layout: the anti-shake on/off button from the top plate has now disappeared into a sub-menu accessible from the LCD interface, with a circular on/off button taking its place.

We can’t say we liked this move, as the smaller, recessed power button is much harder to operate (we also had issues with powering up the camera, but we’ll move on to that later).

Sneaking around the back
The buttons on the rear of the camera have been shunted around a bit too, with the zoom rocker also getting that shrinking feeling while being moved closer to the LCD screen.

We really can’t work out the thinking behind this move. The new, smaller zoom control is much harder to operate and if you were wearing gloves, zooming would be nigh-on impossible.

The small three-way camera/screen/movie switch also remains as fiddly as with the R4, although Ricoh’s designers have seen fit to move it to the right hand side of the camera. 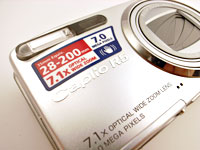 LCD screen
There’s still a healthily large 2.5-inch LCD dominating the back of the camera.

This has been ramped up from 150k to 230k pixels although the difference didn’t seem as stunning as we might have hoped.

A quick caveat here: we ended up going into a camera store and asking them to get out a R4 for comparison.

While holding out both cameras pointing at the same scene we have to say there didn’t seem a huge amount of difference – sure, the R5 seemed a bit smoother, but none of the waiting customers managed to guess which screen was the newer one.

Seeing as the assistant was most unimpressed with our antics we had to cut short our testing, so we can only assume that the differences would manifest themselves under more demanding light conditions or under closer scrutiny.

With all those extra pixels, the screen has to be better so maybe we were all on drugs or something.

Daytime shooting
Like Dracula in reverse, this camera works best when the sun is in the sky.

Taking the R5 out for a stroll around London, we were pleased by its fast power-up times and were constantly reminded of the benefits of having a compact with a proper wide-angle zoom range.

The LCD screen was easy to read (although, being London in September, the sun wasn’t exactly blinding), but we would have liked to have seen an optical viewfinder in there too.

Although suffering from a rather noisy zooming mechanism, the R5 took crisp and pleasing daytime shots, with exposure generally spot on and images exposed at 64 and 100 ISO showing very little noise.

The banding issues that plagued the R4 were also noticeable by their absence too.

The new 640 x 480/30fps movie mode was fun, and produced some smooth clips, although the juddery digital zoom is best left alone (like most digicams, the optical zoom is deactivated when shooting in movie mode).

Night time woes
We were disappointed with the camera’s night time performance.

Purely in the interests of ensuring a full test, we took the camera out to a Brixton club and grabbed the kind of pics that your average punter might take on a night out.

These included a few snaps of the band, pictures of friends looking a little worse for wear, the inevitable drunk ‘group shot’ and some grabbed shots from around the club.

Throughout the night, the Ricoh would sometimes struggle to get a fix in low light conditions, and on a few occasions the entire thing froze up or wouldn’t turn on. Taking the battery out and putting it back in seemed to fix the problem, at the expense of a few missed shots.

Even when the camera was working perfectly, some shots were ruined because of Ricoh’s crazy placement of the flash gun -for many right-handers, their middle finger will naturally fall right in front of the flash. End result: under-exposed shots.

Noisy nights
Noise at 400ISO actually seemed worse than with the R4 and when we remembered to move our fingers out of the way of the flash, the results weren’t too flattering.

The none-too-impressive f3.3 maximum aperture meant that the camera was always reaching up to the higher ISO settings, and the higher the sensitivity, the grainier things got.

Although it was handy to have full resolution ISO 1600 sensitivity, the results fell woefully short of the quality of similarly-priced rivals like the Fujifilm FinePix F30 (although that camera has a greatly reduced zoom range).

Running the photos through noise reduction software like Noise Ninja vastly improved things – perhaps enough to just get away with a 10″ x 8″ print – but we really can’t recommend the R5 for night hawks.

Street photographers looking to grab late night sneaky shots with the camera on 10 second self timer will have to think again too as the flash – yes the FLASH! – blinks brightly on and off during the countdown!

It’s like saying, “Yoo-hoo! Muggers! Over here! Look at me!” and despite scouring the manual we couldn’t find a way of turning it off.

It’s one of the daftest things we’ve seen on a modern camera.

Manual focus
One thing we really like about the Ricoh R5 (and the Ricoh GR) is its manual focus abilities -a rare treat on a mid price camera.

The ‘snap’ mode – in particular – is fabulous for grabbing quick shots but annoyingly Ricoh still haven’t fixed the problem that results in the flash completely overexposing subjects close to the camera.

Sort it out Ricoh – it does the same thing on our upmarket Ricoh GR and we expect better for the money.

Interface
We’ve always liked Ricoh’s clear, no-nonsense interface and had no complaints with what we found on the R5, although saving files to the camera’s internal memory was very slow. 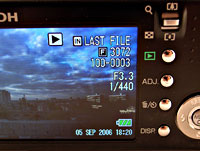 We had some problems with that the SD slot, with a worrying ‘card format’ error popping up unexpectedly halfway through a shoot.

We would have been most unchuffed to have lost all the photos we’d taken, but turning the camera off a few times seemed to solve the problem. Had we bought the camera, this would have been enough to have sent us hot footing it back to the camera store demanding a refund.

As with the R4, the camera is firmly pointed at the point and shoot camera brigade with very little in the way of advanced options for photographers who like to fiddle about with exposure settings.

Despite its mass market aspirations, the camera still doesn’t have too many consumer-friendly scene modes compared to their rivals – a serious omission in our book.

Conclusion
On the face of it, the Caplio R5 offers a lot for the casual snapper, serving up a generous 7 megapixel sensor, built-in anti shake and an impressively wide angle zoom in a suitably bijou package.

With its impressive 28mm-200mm lens, there’s a lot to like about the R5, and anyone prepared to work with the camera could eek out some high quality shots, although consumers looking for an easy-peasy, point’n’shooter might be frustrated with the camera’s poor low light performance.

After encountering so many problems during the review, we’re finding it hard to recommend the R5 outright, although our previous positive experiences with Ricoh products make us inclined to put the glitches down to early production teething problems. Let’s hope we’re right.

We still can’t see enough here to encourage R4 owners that it’s worth the upgrade, but the combination of the mighty lens, great daytime pictures and the small form factor may prove an irresistible attraction to some consumers.

We just hope they buy their new R5 from a company with a good returns policy, just in case.