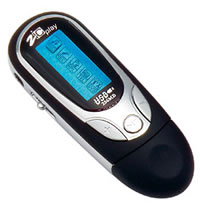 The Zicplay MiniKey is a tiny audio player. It comes in versions from 256MB to 1GB. There’s also a version with a built in FM tuner. The version we tested was the 512Mb model.

There’s an LCD display which will show lyrics/track listings/etc. It feels quite plastic – but then it’s also very light, only weighing 25g including the AAA battery which allows 15 hours of listening.

Features of the unit are a voice recorder (using ADPCM) and 7 backlight colours for the LCD display, some are more readable than others. It also supports a basic phone book (with some Windows software) allowing basic access to contact info. The system is also firmware upgradable.

Earphones are the average earbud type, but not really unexpected with this type of device, or at this price.

The major drawback is the MiniKey only supports USB 1.1 so it’s relatively slow compared to other MP3 players to get files into the unit (or using it as a USB data device).

The instructions that come with the unit aren’t particularly great.

Summary: It’s pretty cheap, and does what you’d expect.