The quote isn’t quite accurate, but it makes the point. The words are (nearly) those of BT’s internal “tame futurologist” Graham Whitehead; and what he actually said was that you will be associated with 10,000 processors.

Whitehead’s job is to march around BT’s research facility at Martlesham Heath, near Ipswich (the facility formerly known as Adastral Park, but the name seems to be reverting to Martlesham) and tell the researchers what to study. A group of us met him on a visit to the facility where BT was showing off its vision of what IT can do to home, office, and other service providers like banks and doctors and chemists.

The fascinating thing about Whitehead was that he was the only part of the presentation to be an attempt to see the future. The rest of BT’s exhibition was (they emphasised this!) stuff you can actually buy. So the demonstration home had nothing in it you can’t go out and buy.

The future, however, is further away, and harder to guess: it’s Whitehead’s duty to provide the map for BT – and boy! does he do a good job. I just sat back and listened.

“The next ten years will see more changes in lifestyle than the previous hundred. We are moving towards the AORTA world – Always On Real Time Access – where everything BT does will be Internet Protocol over MPLS.”

“RFID? Don’t worry about being tracked down the street by RFID scanners. It will be your DNA that tracks you, because your VISA card will have your DNA on it, for biometric scanning, instead of the hologram it has today.” 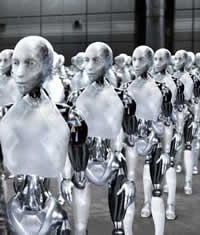 “Mobile will go everywhere. BT’s biggest customers are the mobile networks. And the pattern will evolve along the lines of BT Fusion – a Bluetooth wireless phone which is also a cellphone, and which negotiates the best call rates for you every time you dial someone. The tipping point in our move to the mobile AORTA world, will come when nobody places calls any more. It won’t only be that my car will be able to converse with yours; it will be the point where they are connected anyway; no call needed, because both are always on.”

“The reason a car might talk to another car? Traffic. We won’t just know where the crashes are, so we can dodge them; we’ll have the car plan the route. It will know that it’s Saturday when I always go to see Granny, and it will map out the route before I even switch on the engine, and work out what other cars are doing and where the congestion will be.”

“Will it become anti-social to travel? By the year 2015, oil production will have peaked; oil will become a precious resource for the plastics industry, and travel for pleasure will reach the tipping point. People will expect to have the world brought to them, rather than having to go there.”

But will there be big surprises? He thinks so:

“Robots are coming. There is a Sumo robot. The Sony robot – now discontinued – is 19 inches high; it can look at symphony score and conduct orchestra, better than a human. But if it’s not selling, why is Sony wasting money on it? Because someone will have to push your wheelchair around the home in 30 years! It won’t be the little people who will push your wheelchair: we aren’t making enough of them. Instead, robots will be the cleaners, porters, intelligent wheelchairs, and other servants.”

And we’ll need them: “The latest baby has a better than 40% chance of reaching 150; it will be the result of stem cell research. There will be a window between the ages of 70-85 where some will get dementia; and if you don’t get dementia there, you will get through it.”

But the cost of energy will mean that today’s massive, hot processors will become unfashionable. “I see a lot of small distributed computers. You will be associated with 10,000 processors. Just for fun, I decided to investigate my car, and see how many computers it had, and I found 76 processors in my vehicle. So Intel will bring the clock speed down, bring the lines in from other processors. I think the total power of individual computers will go down, from now.”

HDTV? “Most of us won’t be able to see the difference, frankly. I can remember when a colleague retired, and bought himself the top-of-the-range hi-fi system, and was very proud of it; we all went around to listen. We all thought: ‘Awful mains hum!’ and it was. We got him to check his hearing; it turned out his ears levelled off at 300 Hz. But the problem is, if you buy a big TV set, HDTV will be all you can get.”

Spam? “It won’t be a problem, because it won’t be spam. It will be advertising precisely aimed at you. I’ll send you mail which will make you feel like you’re the only person in a group of one, and the most important possible person in that group.”
And what can’t the IT world do? “A pint of beer. I’ve been setting this challenge for 15 years now, and nobody can crack it. If you want a pint of beer, you’re going to have to get up and go get it.”