Netgear have released a new wireless access points with claimed speeds of up to 240Mb/s, beating that of wired networks of 100Mb/s (though modern Ethernet wired networks can now go up to 1000Mb/s or 1Gb/s and faster).

Actual speeds are likely to be much less, especially as more devices are added to the network as each to a degree will compete for bandwidth. However 100Mb/s speeds are potentially achievable, which is suitable for streaming music and video around the house (even High Definition/HD TV).

In order to achieve these high speeds, ALL the devices in the (wireless) network must use the RangeMax 240 system, though it will interoperate with older RangeMax and 802.11b/g systems.

Speed gains using clever encoding
The RangeMax kit uses an underlying technology known as MIMO (Multiple-Input Multiple-Output) which uses many aerials on the base station to “steer” the beams to the particular client. Each beam can use different frequencies. This allows data resilience and as different frequencies will travel differently through walls etc, this means the system works better than straight 802.11b/g systems. Using multiple beams means more bandwidth (each beam can handle X amount of data, so two beams mean 2X data), however as multiple frequencies are used, there’s actually a greater increase (each frequency also can transmit a certain amount of data). This all gets very complicated, but is known as Spatial Multiplexing and adaptive channel expansion. RangeMax also uses adaptive channel selection to avoid channels (frequencies) that are being used by other systems.

Though these clever encoding techniques do offer big advantages in terms of throughput and resilience they are also totally proprietary to Netgear, so won’t work with other manufacturers kit (unless in standard WiFi mode, which won’t give major speed enhancements). 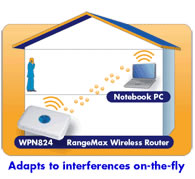 The IEEE (the body that sets the 802.11 standards) are working on the next phase of standards which will incorporate MIMO and other techniques, but they are not due for a while and it will take manufacturers a while longer to then make systems that conform to those new specs. There are no guarantees that any kit now will be upgradeable to those new standards.

Buying now may give instant gratification but there’s a good chance that Netgear will be your only choice of equipment in the future.