Comcast Corp. is working with TiVo on an advertising system that will slap new, updated commercials into already-recorded programs.

Viewers looking to sit back and watch their favourite shows recorded months ago would have their old commercials replaced with brand spanking new ones.

Like a Big Brother stalker in your very own home, the system could rummage through your viewing patterns to serve up specific adverts targeted at lucky old you. 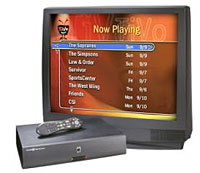 The new technology could help make DVRs more palatable to advertisers and the television networks because it should increase the chances of someone watching an ad rather than fast-forwarding through it.

Comcast Chief Executive, Brian Roberts, was clearly stoked by the idea; “In the long term, advertising is going to be a big winner. They’re going to get more bang for the buck.”

We think it makes sense to offer advertising that is directly targeted to the viewer; it could even be of use if the selection is comprehensive enough.

As to if TiVo owners would find this acceptable is quite a different issue. Many of the early purchasers of TiVo’s bought them because they wanted to avoid adverts and the only way DVR manufacturers will stop those people fast forwarding through ads, is to physically remove the button off the remote.

Separately, TiVo and satellite broadcaster, The DirecTV Group, announced a deal to let both companies sell advertising for TiVo recorders. The DVRs recently began showing static images, such as company logos, when fast-forwarding some shows.

Under the pact, both companies are free to sell ads on the service, and each retains its respective revenue from any sales.