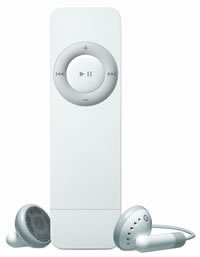 The success of Apple’s iPod range is well known. They have to date sold over 10 million units and have total domination of the hard disk-based portable music players. The only market they weren’t in was the solid state memory, or Flash memory players. To address with the hope of being the winner there too, Jobs announced the Apple iPod shuffle.

The controls are very simple, numbering just five – play/pause; volume up and down; next and previous track. Unexpectedly it has no display, so there is no visual way to know which track is playing. Apple being Apple, worked this idea to their advantage, suggesting that receiving your music in a random, unexpected order was fun. We’ll see if the market agrees.

Connecting to either a Mac or PC via its USB 2.0 port, it also takes its charge onto its 12 hours battery this way. This is a great feature that players like the Jens MP-130 had used, which we found a real boon.

While we’re on the Jens MP-130, it had a really excellent microphone build into it which enabled quality recording of interviews and the like. It’s noticeable that the iPod shuffle doesn’t have a mic onboard or even a jack for an input. This is for playback only.

The integration with iTunes is strong and features AutoFill. This gives various methods of selecting music tracks to go onto the iPod shuffle, filling it to capacity.

The experience that we’ve had in the Digital Lifestyles office with USB music players is that the ones that have a clip-on lid end up having problems with the lid dropping off. The iPod Shuffle is using a removable lid as the attachment to the lanyard which then hangs around the neck.

The reaction throughout most of Jobs’s presentation was pretty ecstatic as is the norm, with them cheering and whooping on cue. Strangely during the presentation of the iPod shuffle, it was pretty restrained, even quiet. The only audible excitement was during the announcement of the price of the base model.

We’re sure Apple will be hoping the public has a more enthusiastic reaction to it. We’ll be getting our hands on it this Friday, so we will update you after that.