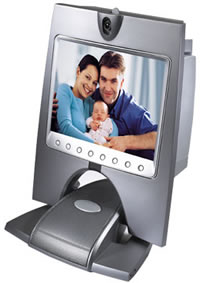 Every few years there are a number of announcements about the launch of new video phones. For decades the public have been told that this revolution is just around the corner.

For most of those years the means of transferring the speech and video information has been via a telephone line, initially a PSTN, then in the ’80’s, ISDN. Due to the limitation of the amount of bandwidth, using them was a pretty unsatisfactory experience with the video being ‘choppy’.

As broadband became more available, the bandwidth that video requires started to be come more widely installed in peoples homes and other places.

For quite a while this has been available to the technically savvy using software solutions available on desktops and laptops. By simply plugging in a cheap USB camera and installing some (often free) software, people have been able to chat and watch each other.

One instance sticks in my mind. When I was organising the Digital Lifestyles conference theme day at IBC 2003, one of the speakers, Stuart Cheshire, Ethernet Guru at Apple recounted his connecting to home. He had his hotel broadband connection, connected up his Apple iBook, slotted in an Apple iSight and, for the equivalent cost of a long distance call from Amsterdam to the US, he was able to chat to his family for as long as he wanted, with the added benefit that both he and his family where able to see each other, seeing the facial cue so important in a face-to-face conversation.

Now that broadband is an established fact for a large number of western households, there is a new wave of broadband, consumer-friendly devices that don’t require PC’s to function – and that’s going to make them usable by a range of generations.

Viseon used CES to launch it VisiFone, labelling it the Digital Home Telephone. They claim by keeping the communications digital from end-to-end, the free standing unit provides CD-quality audio and TV-quality video.

They claim one of the secrets to their success is their use of the latest chips from Texas Instruments (TI) specifically; TI’s newest IP phone system-on-a-chip, the TNETV1050, which provides enhanced digital voice quality and conferencing; and the DSP-based TMS320DM64x digital media processor, offering high quality, multi-channel video.

Viseon’s business approach is to sell the unit via broadband service providers. The first they have announced is a deal with well known VoIP provider, Vonage, who run services in the US, Mexico and of last week, the UK.

Another offering at CES was Ojo from Motorola, which they label the Personal Video Phone. It works on a similar principle of a screen and embedded camera on a stand. The Ojo’s large colour screen is 5.6-inch, 9 x 16 format, which they say frames the face better.

It uses an advanced MPEG-4 coding standard (H.264), which enables transmission of 30 frames-per-second video with synchronized audio at data rates as low as 110 Kbps.

Ojo differs from VisiFone in that it can also handle phone calls over ‘normal’ phone lines using its cordless handset.

Ojo should be available in the US from Spring 2005 at $799, plus an as-yet-undisclosed monthly service charge.

How long it will be before we have Video phones on the street, a la Blade Runner is unclear, but finally things appear to moving in the world on consumer-friendly videophone.