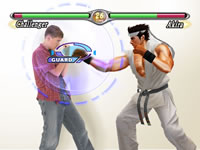 Sega are launching a wide reaching, active and colourful campaign to trumpet in the arrival of Sega SuperStars, the first non-Sony game developed for the EyeToy. Available from October 22nd, the campaign will highlight the excitement and interactive nature of the game.

For those of you who may not know – and they’re might be some – the hugely innovative EyeToy is a camera that plugs into the PlayStation 2 and sits on top of the TV. An exercise in body mnemonics, it projects an image of the gamer onto the TV screen and tracks player’s movements, as they use different body parts to control characters, allowing the player to become an intrinsic part of the game.

“Eye Toy is not as well known as we would like it to be”, says Sega’s Tina Hicks as she elaborated on the military precision of the campaign.  “We are targeting the games press and putting sig sheets in phone booths.  A number of roadshows will be taking place at shopping centres across the UK, as well as in-store promotions from the 28th to the 30th of October.”  Point-of-sale material will also be displayed throughout specialist gaming outlets and mainstream entertainment chains including Blockbuster and Gamestation.

Features have also been written in those pillars of modern teenage culture – Bliss, Sugar, Smash Hits, Top of the Pops, and TV Hits, so if you are too young to be frequenting the hairdressers, perhaps your Granny might do the necessary reading.  This may be the case since the core target audience for the campaign is children aged between six and 14.

Sega SuperStars features 12 unique mini-games, each with one of the characters, offering 12 unique interactive experiences.  It uses the in-game motion capture abilities of the EyeToy camera to allow gamers to transpose themselves into some of the most popular Sega characters — including Samba De Amigo, Sonic the Hedgehog, House of the Dead, and Virtua Fighter.