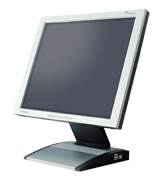 Hyundai, well known Korean makers of displays (and much else), has released a 17″ LCD TFT screen aimed specifically at video game players.

To provider the player with a feeling of smoothness when playing, video games redisplay the graphics on the screen many times a second (known as the refresh rate). LCD screen have, up to recently, found it difficult to keep up with the demands of modern games and graphic cards, with games like Doom 3 being particularly testing. When the screens don’t refresh quickly enough the moving objects create ghosting.

The Hyundai ImageQuest Q17+ has a refresh rate of 12ms, current the industries fastest reaction speed. While it is not the first 12ms screen on the market, it’s the first that we’ve been aware of that is marketed specifically at game players.