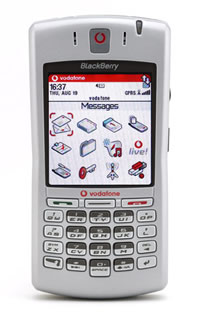 Vodafone have today announced a new form of BlackBerry, the 7100v. It has been designed with the BlackBerries creator, RIM (Research In Motion) and will be the first release of a new form factor.

I’d seen BlackBerries around but had dismissed them as a suits tool, and frankly had looked down on them a little. I saw them as used by people who didn’t know better, just getting them out to show off.

While I was in Amsterdam for IBC, there were a couple of occasions where a BlackBerry saved the day. In one, a speaker arrived in Amsterdam without knowing where his hotel was, fortunately I had sent him an email as he landed at the airport – he picked it up on his BlackBerry and we were able to sort things out quickly.

Now having studied them in detail, I can see they are about the most efficient use of space a text input device could have – a thumb-able keyboard and compact screen.

The new model from Vodafone differs from the ‘normal’ BlackBerry approach of full QWERTY keyboard and large screen. Vodafone’s new 7100v takes its design cue from a mobile phone handset. It has a slightly expanded numeric keyboard, taking it from three keys across to five.

To maintain the ease of input of text, the 7100v uses the RIM-developed SureType. It appears to be very similar in function to T9, but it has only two possible characters on each key, rather than up to four with T9. Paul Stonadge, Data Solutions Executive at Vodafone UK, told us the best way to get acclimatised to it is to “get into the mind set that it is a QWERTY keyboard”

It has a built in library of 35,000 words that can be user-expanded. Another smart feature is the automatic reading in of the contact address book, leading to all your contact names being included in the typing dictionary – very smart.

Vodafone have also taken the opportunity of heavily branding both the handset and the interface – it will be clear to the user that they’re using a Vodafone.

Vodafone previously released BlackBerries, the 7230 and slightly larger screened 7730 were aimed at medium to large enterprises. They are aiming this at the SME and SoHo market – a smart move considering how often small business people are away from their desk and how vital it is form them to stay in touch.

One of the winning features of the BlackBerries has been that email was pushed to the handset rather than the normal method of repeatedly asking the mail server if it had anything new. To use the push feature, the BlackBerries originally needed to run in conjunction with MS Exchange and Lotus Domino servers – the Enterprise solution, as they labelled it. This changed a while back to allow mail to be picked up for the widely spread POP servers.

We’ll be testing in October, so stand by for a review.