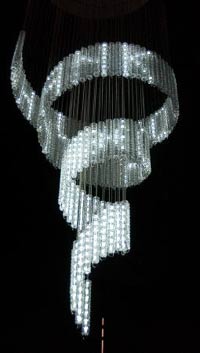 Swarovksi, an Austrian crystal group famed for their chandeliers (where else do you get yours anyway?) have demonstrated a chandelier that displays text messages sent to it from mobile phones.

The chandelier, called “Lolita” (oh no – that’s going to do strange things to the search engines) uses strings of LEDs hung in crystal cylinders. The rows of LEDs are then switched on and off in sequence to create a scrolling dot-matrix effect – rather like an extraordinarily posh and expensive version of those displays you get in cab office windows.