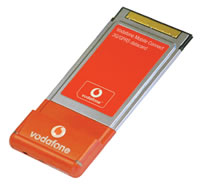 Vodafone have announced today that it will be starting its 3G service in Europe. Interestingly their first offering will be a data only service using the catchyly named Vodafone Mobile Connect 3G/GPRS data card, rather than a voice service. Slotting one of these into a laptop will provide data speed up to 384kbps.

It is clear that Vodafone is not just throwing money at bring their 3G service to the public – they are taking a cautious, measured approach to it. The service is launching in seven European countries over the next four weeks; UK, Germany, Italy, the Netherlands, Portugal, Spain and Sweden. The coverage will not be comprehensive to start, but will focus initially on major cities and grow through transport routes, then expand over the next few years. When the 3G service becomes too weak, the card will automatically fall back to GPRS without interrupting service.

We feel there may be a number of reasons that Vodafone have launched their initial offering as a data service and not voice as was expected. In short, predictability – of income, subscribers and usage. The data service, aimed at businesses, will more than likely bring in more income than the voice service, for the use of the same infrastructure. It is unlikely that there will be thousands of individuals clamouring to get on to it and signing corporate accounts will give them a far better ability to plan for expansion and usage patterns. In addition, may be something as simple as they do not feel the handsets that are currently available would appeal to their clients.