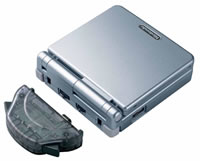 In a move to try and balance the efforts that Nokia are putting in to the N-Gage portable gaming platform, Nintendo has been working closely with Motorola to create a wireless adaptor for the Game Boy Advance and Game Boy Advance SP. The reasonably sized add-on uses the already crowded 2.4GHz band to enable up to five gamers to play against each other.

Motorola say they have applied considerable effort to make the unit consumer as little power as possible, while using the TDMA (Time Division Multiple Access) communication protocol to provide game users a fast receive-and-respond capability similar to a wired experience.

The wireless adapter with the new Game Boy Advance software “Pokemon FireRed” and “Pokemon LeafGreen” will be launched in Japan first half of 2004.